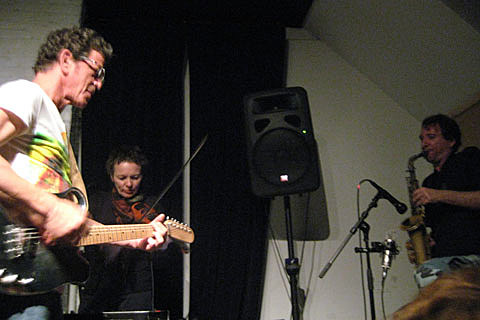 Lou Reed, Laurie Anderson and John Zorn faced a furious crowd on Friday night, playing cacophonous music to a cacophony of boos at the Montreal International Jazz festival. Fans expecting Sweet Jane or Walk On the Wild Side were instead met by the skronk and skree of Reed's more recent free-jazz work, infuriating sections of the crowd. As audience members hollered their complaints, Zorn responded. "If you don't think it's music, then get the fuck outta here." Then the walk-outs began. [Guardian UK] (via)

More than 1,000 people turned out for a night of Reed/Anderson/Zorn improv on July 2nd (a week ago today). Some booed, heckled, walked out, asked (and got) a refund, and went home to complain about it on the internet (other people stayed, some maybe even enjoyed it). A very short clip of the concert is below.

A similar show that took place at The Stone in 2008 is for sale in John Zorn's shop as a live CD. All funds raised from its sale go to benefit the non-profit club. John Zorn next plays the Stone on July 30th.

Laurie and Lou recently went to Australia and Coney Island.

John Zorn will make an appearance at the New Museum on July 13th, and John, Lou and Laurie, as well as Faith No More's Mike Patton, will be getting together again for a show at the NYC Opera in 2011.

Video from the Montreal concert and a press conference from earlier in the day are below...