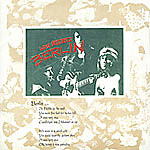 "Recorded in 1973, Lou Reed’s Berlin was the unexpected, critically panned, follow-up 'concept album' to his popular hit record, Transformer. Although it became a cult favorite and was reissued, Berlin was never performed live. Until now! Arts at St. Ann’s, the Sydney Festival, and UCLA Live! have joined forces to present a theatrically realized concert version of Reed’s stylized rock paean to life outside the circle, the orchestrations filled with the lyrics of the broken hearted and willfully disabled...the drifting tormented addicts of love formalizing their own downfalls in the outskirts of the divided city. From Beerhalle staccato to the embers of a final Sad Song...this is an evening to press between the crumbling leaves of Fall."

Filed Under: Lou Reed
Categories: Music News
Comments
Leave A Comment
Lou Reed’s writing on Tai Chi & more compiled in new book with foreword by Laurie Anderson
Indie Basement: Best Reissues, Box Sets & Compilations of 2022
The Dirty Nil members list their favorite albums and movies of 2022
Rhett Miller tells us about the inspirations behind new album ‘The Misfit’
25 of our favorite covers by Sharon Van Etten
The Birth of Punk exhibit showing at the Seaport through August