A still from 'Louie' 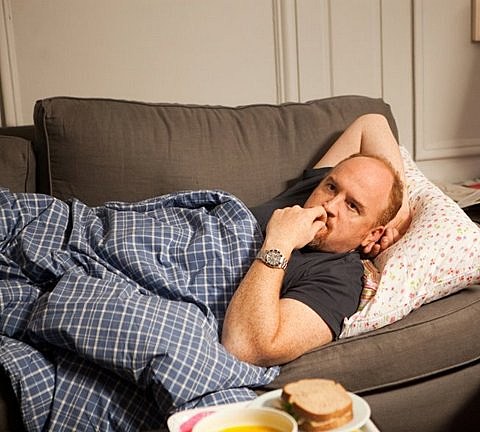 As you may have heard, tickets to Louis CK's upcoming tour -- including the October 24th - 28th dates at the New York City Center -- are being sold exclusively through his website, sidestepping big ticketing agencies to keep prices lower and stamp out scalping. The intial string of NYC shows are sold out but he recently added two more on October 23 and you can still get tickets (early show / late show) to those.

He's been making the rounds on the talk show circuit talking about it, but as to the scalping part of his plan, he wrote in to comedy blog LaughSpin to detail things a little more:

I'm doing 67 shows on this tour and we've sold 135,600 tickets to those shows after one week on sale. In addition to the tour, I'm doing two shows in one city that are on sale through traditional ticketing.*
So as a comparison...

There are 1100 tickets available on stubhub alone for those two traditionally ticketed shows out of 4,400 available (Almost exactly 25%). ** and these shows aren't sold out yet.

There are less than 500 tickets available on all scalper sites (including stubhub) out of the entire 135,600 tickets that have already been sold, from the tour sold exclusively on my site, louisck.com (substantially less than 1%)

So it's working. So far.

Also, we are learning that, of these few tickets being scalped for my tour, some are the same tickets across a bunch of different sites. They are sharing tickets.

Our goal is to get even these 500 or less tickets back into the hands of fans at their original price. How we are doing that is our business that I won't share right now. But so far our plan is working and we have learned a lot. The main message I'd like to convey to ticket-buyers out there is that buying a scalper ticket to one of my shows is a tremendous risk (well, a risk equal to how much you paid for it) [LaughSpin]

Elsewhere on the web, The AV Club interviewed CK and the whole thing is a great read. But specific to this post, he gives further insight into his decision to do things his way this time:

AVC: Were excessive service charges on tickets something that had bothered you for a long time?

LCK: Well, obviously the problem of my fans paying too much to see me wasn't a problem when I was struggling. It's a new thing. I don't know. I don't like when I'm prevented from doing things the way I think they should be done. I do something called "recession tipping." I make more than some other people in the world, so if I'm in a restaurant, I tip over 20 percent--I tip more. Because I know that other people can't. Tipping is a thing where you can actually steal money from a waiter; you can just not give them any. A lot of people, when they go out to eat during a recession, they just don't tip, and I'm aware of that. It's just my quiet thing that I do. I'll tip over 20 percent because I can afford it. It's just my own voluntary Buffett Rule. That's all it is. When I negotiate with somebody who I'm working with on a crew, like if I hire a first A.D. or something, the way I work it in my head is, I tell them my economic realities--this is a low-budget show--and then I ask them to tell me how much they want. Say the guy says, "I want $500 an hour." That's not realistic; I'm just making it up. Then I'll say, "Okay, I'll give you $550." You know what I mean? I ask him to think about what he really needs; when he tells me, I give him a little more. It buys me goodwill with this person; I feel good about what I'm paying them. I like to give people a little more than they want, and I like to ask people for a little less than they're willing to give. So when I found that through selling tickets I wasn't able to do this, it was frustrating to me, that I literally couldn't do that the way that I believe it should be done, but just by me. Not by other people. I don't judge anybody else. And I think these ticket services are very well run, they're really smart, they got it all set up. And if I was them I'd do it the same way. Or no I wouldn't. [Laughs.]

AVC: You wouldn't because you're doing it your way. It's different than the way Ticketmaster does things.

LCK: Right. I'm just staying away from criticizing anybody else. The point of it, to me, isn't to stick it to somebody else or out of anger toward something else...

AVC: You're not about sticking it to The Man?

LCK: No. It's really providing an alternative. And there are many theaters that we went to with this ticketing service and my show who said, "We don't want to do it because of our economics." And then we would politely say, "Thanks anyway," and keep looking in every city until we could find a place that could accommodate us. That it didn't hurt them, that they didn't have a conflicting affiliation, and that it could make them a profit. So that's why we're playing this place in Chicago. Last year I was at the Chicago Theatre, and I love the Chicago Theatre. And I'm grateful for the shows I did there with the promoters and ticketing services that they use.

Meanwhile, don't forget that the third season of Louis CK's show, Louie, is currently airing on FX (Thursday's at 10:30 Eastern) and the second episode airs tonight. You can watch a preview for it below.