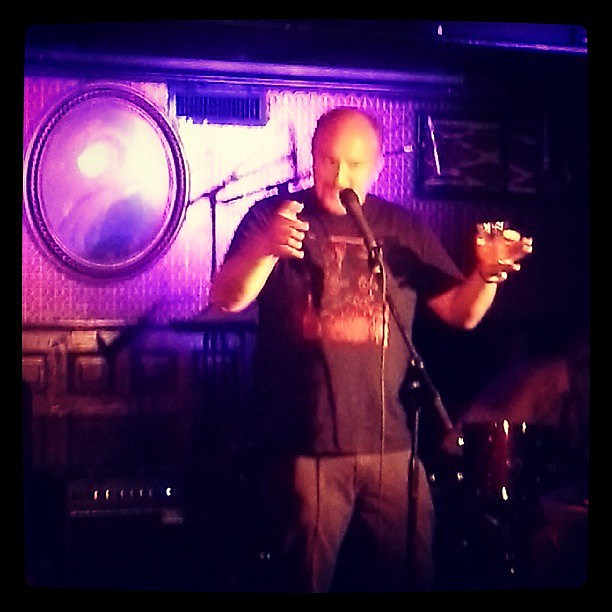 Friday October 4th was the anniversary of when I moved my then-skinny ass to New York City and made the unintentional commitment to a life of poverty and alcoholism. As this anniversary of anniversaries fell on a Friday evening, my now-fat ass wanted to celebrate in boozy style, so of all the shows on this fine city's entertainment agenda, I decided to show myself a good time at Dave Hill's inaugural installment of Meet Me In The Bathroom and Tell Me All Your Secrets, which is now an official monthly at Union Hall in Park Slope. The show was set to feature performances by house band Valley Lodge (who play Mercury Lounge this Saturday) and comedy by Valley Lodge member Dave Hill (who joins Jake Fogelnest at the Bell House Thursday), the absolutely phenomenal Brooke Van Poppelen, Klaus Gold Pass All-Time favorite Todd Barry, uber-offensive yet completely brilliant rhymesmith T. Berry, and a storytelling session with Gorilla Biscuit/Quicksand frontman and Klaus-idol since 1991 Walter Schreifels. All of the above totally ruled.

But the capper of all cappers was an unscheduled appearance by none other than the great Louis CK (who appeared at the Paley Center one night earlier). When Louis waddled onstage, his presence momentarily sucked the air out of the room which then exploded in a cacophony of applause, cheers, and shouts of "LOOOUUUUUUUIIIEEEE." The excitement in the room was some of the most authentic and overwhelming I have ever seen with people doing a triple-take at Louis, then a triple-take to whomever they went to the show with, followed by another triple-take at Louis. Anyhow, it was the best anniversary a lone wolf like myself ever could have dreamed of and it perfectly encapsulated why I love this rotten city with all my heart. Anything can happen.

Obviously still riding the wave from his dominating set at Union Hall, Louis decided to shoot out one of his absolutely rare email blasts, urging his subscribers to pony up the completely reasonable $5 to download his special "Oh My God" which aired on HBO in the spring and won an Emmy for best writing of a variety special. Read the entire sales pitch below, and when you have a sec GET THIS SPECIAL.

Well. Hello. This is Louis CK.
Before I start wasting your time let me just get to the point which is that my latest standup special louis ck oh my god is available on my website, along with a bonus extra long version, for the usual 5 dollars.

For more details and I have your time horribly wasted, read on...
Hi. So. it has been a while since I last wrote to you.
A lot has changed since my last email to you. Firstly, you'll be glad to know, I lost seven pounds! I know! And all it took was absolutely no dedication or commitment to losing any weight. And it paid off.
Now that I knocked that out of the park, I'm setting my sites on more goals. Such as "none of my habits changing in any particular way". I think if I really buckle down, I can make that happen.
All of this is part of my new approach to life. I call it "believing in myself". Sounds weird, huh? Well it's really very simple. I believe that I exist. And that I'm going to pretty much keep existing and being the pretty much same guy, with the same qualities and skills ive always ha or lacked, especially when averaged over time, no matter what happens.
For instance. I BELIEVE that I'll alway be a little but late for most things. I BELIEVE that if my work habits were 4% worse, I'd be homeless right now. I BELIEVE that I am often sleepy. See? It works!

I'm writing to you today to let you know that "Louis CK Oh My God" which is my latest standup special, which aired on HBO in the spring and won an Emmy for best writing of a variety special. (I'm not trying to brag. I'm just trying to get you to buy the thing. By bragging.)

"Louis CK Oh My God" is available on my site for 5 dollars, for that, you are entitled to the following:
1. You can download the special, as it aired on HBO "drm free" all over the world as many as 3 times.
2. Or you can stream it 2 times.
3. You can download an audio version of the special.
4. You can download or stream a longer version of the special. This is basically a rough cut with more jokes in it.
All that for 5 dollars. I mean, it's only a lot if you like my comedy. If you don't like me or my jokes, then it's just a 5 dollar nightmare.
The video of this special is only available on my site. So if you want To own your own version, this is the only way to have it. The extended version had only ever been seen here. So ... That too.
As always I'd like to urge you not to steal or share this video so that I can continue to offer stuff on my site in this friendly and cheap way without losing my ass in the process. I don't want to lose my ass. I have a great, great ass.
So that's mostly it. Please go to louisck.net to buy oh my god and for more information. Oh, also, we now accept Paypal, amazon payments and Dwolla.
Okay. That's it. Please enjoy your life. And please be always curious about other people.
Your friend,
Louis ck