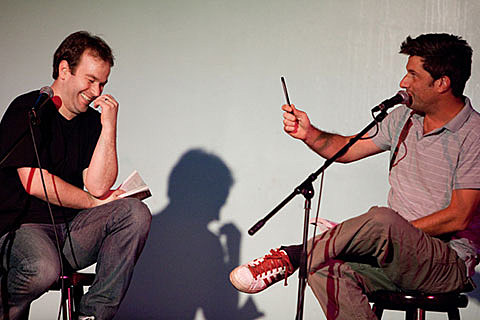 Mike Birbiglia, you know, the guy from the subway ads that has a book out, celebrates, well, that book, at Caroline's on Tuesday, November 2nd. Tickets are on sale.

Amazingly there are also still tickets left for Birbigs' November 22nd "My Girlfriend's Boyfriend" show at UCB. That's a Monday which is convenient because then you can stick around for Whiplash.

One week earlier, Nick Kroll does the pre-Whiplash show for only $5.00 which is cheaper than the shows he'll be practicing for.

The New York Comedy Festival presents "Louie: A Conversation with Louis C.K.", at the Paley Center this Wednesday, November 3rd. Tickets are on sale.

Who knows who will show up to play later that night, and the night after that, at UCB for two special non-Monday editions of Whiplash, aka "The Best of Whiplash."

Also Wednesday: "The world premiere of Dave Hill's Rock Shop with special guests PAT KIERNAN of NY1, MICHAEL SHOWALTER, and DOUG GILLARD (Guided By Voices/Nada Surf)!" I mean, I don't think you need to know more than that to immediately want to buy a ticket, but just in case:

Dave Hill's Rock Shop is a new comedy "talk" show which will hopefully happen the first Wednesday of each month at Park Slope's newest buzzworthy club, The Rock Shop. The show will run approximately an hour and will feature comedian/guitarist and Ohio native, Dave Hill hosting the shit out it. Dave Hill's Rock Shop will feature interviews with a famous or semi-famous or not so famous person, a famous or semi-famous or not so famous comedian, plus the focus of the show: Dave challenges a famous or semi-famous rock musician to a guitar duel (possibly to the death). The show is being produced by Caroline Creaghead (Tearing The Veil Of Maya / Eugene Mirman's Comedy Festival / The Rope Swing) and Jack McFadden (The Bell House / The Rock Shop booking guru) and is sure to have South Brooklyn peeps peeing in their seats (don't worry, we clean them, sorta).'

Our debut show will be on Wednesday, November 3 at 7:30pm and features Pat Kiernan of NY1, comedian Michael Showalter, and guitar hero Doug Gillard of Nada Surf & Guided By Voices. The show will cost $7 and you'll feel pretty good about getting your 7 dollars worth. There will be no refunds.

Unlike one of the the non-Doug Gillard Guided By Voices shows coming up, The Rock Shop is offering no refunds.

One of Dave Hill's bands, the one with Moby in it, plays Mercury Lounge on December 4th. 21+. No refunds.

Mike Birbiglia was on Jimmy Kimmel last week. Video of his segment below...