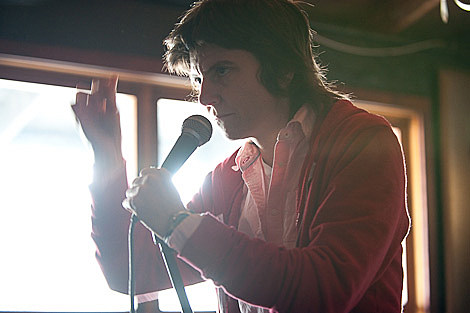 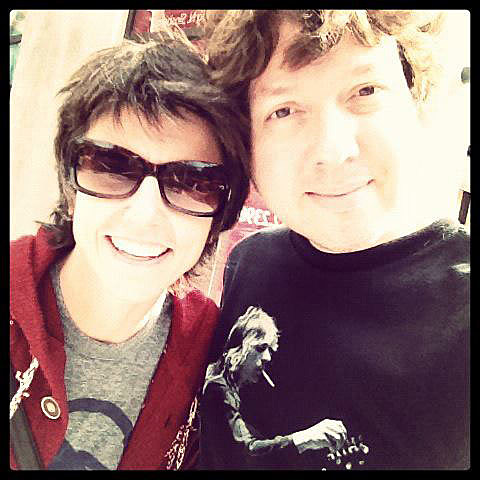 A while back the blogosphere, or blognation, or blogtation, or blogtinent, or whatever you call it exploded with the story that during an August 3rd performance at Largo in LA, Tig Notaro made a public announcement that she had been diagnosed with breast cancer in both breasts just one day prior to said performance. What followed was a performance that had the audience (which included folks like Louis CK and Ed Helms) riveted. But the tragic news of cancer wasn't the only thing that had befallen Tig in the 4 months leading up to that performance; her mother passed away unexpectedly, she ended a long-term relationship with her partner, she battled pneumonia, and while beginning work filming the feature In a World, she contracted a deadly bacterial infection in her digestive tract, causing her to lose 20 pounds and be hospitalized for a week. How anyone could muster the strength to endure such an array of tragedy in such a short time is beyond me. But Tig... she not only had the strength, but she shows no signs of being defeated by it.

As I mentioned, the great Louis CK was in attendance at the show and he had the foresight to ask Largo owner Mark Flanagan if he happened to record her set. Luckily, it was recorded and on Friday October 5th 2012, Louis released Tig's performance in its entirety as her sophomore album, entitled LIVE (as in, continue to live) exclusively from his website. This audio recording is only $5; from each purchase, Louis gets $1 and Tig gets $4. Tig is donating some of the proceeds to cancer research to boot. If you have never heard Tig, you've been missing out. She is the greatest. At her CD release show at the Knitting Factory on August 20th 2011 I literally did a spit-take which was very unfortunate for the people sitting around me (that is one of only two spit-takes I've ever done; the other occurred the other day while watching the Inbetweeners discussing Sleeping Beauty). Read Louis CK's entire message regarding this recording below.

In other Tig news, she is continuing to dominate the shit out of life. On September 20, 2012 she appeared on Conan (watch that interview below), and has been profiled in The New York Times Magazine, Rolling Stone, Entertainment Weekly, Fast Company, and the Huffington Post with other profiles being scheduled as we speak with Vanity Fair, The New Yorker, Dr. Oz, and more. Tig also just closed a book deal with a top publishing house, Ecco, an imprint of Harper Collins, after a competitive 6-way bidding war. She had some fall tour dates scheduled, but they all appear to be canceled.

From what I've heard, the cancer treatments she has undergone appear to be working and her prognosis is looking positive. All of us at BV wish Tig the very best.

--
A Message from Louis CK

Hi. This is Louis. I'm a comedian and you bought a thing from me. Well, I'm writing to tell You that there is a new thing you can buy on my website louisck.com. It's an audio standup set by not me but another comedian named Tig Notaro. Why am I selling someone else's comedy on my website?

Well, Tig is a friend of mine and she is very funny. I love her voice on stage. One night I was performing at a club in LA called Largo. Tig was there. She was about to go on stage. I hadn't seen Tig in about a year and I said how are you? She replied "well I found out today that I have cancer in both breasts and that it has likely spread to my lymph nodes. My doctor says it looks real bad. ". She wasn't kidding. I said "uh. Jesus. Tig. Well. Do you... Have your family... Helping?". She said "well my mom was with me but a few weeks ago she fell down, hit her head and she died". She still wasn't kidding.

Now, I'm pretty stupid to begin with, and I sure didn't know what to say now. I opened my mouth and this came out. "jeez, Tig. I. Really value you. Highly.". She said "I value you highly too, Louie.". Then she held up a wad of note-paper in her hand and said "I'm gonna talk about all of it on stage now. It's probably going to be a mess". I said "wow". And with that, she went on stage.

I stood in the wings behind a leg of curtain, about 8 feet from her, and watched her tell a stunned audience "hi. I have cancer. Just found out today. I'm going to die soon". What followed was one of the greatest standup performances I ever saw. I can't really describe it but I was crying and laughing and listening like never in my life. Here was this small woman standing alone against death and simply reporting where her mind had been and what had happened and employing her gorgeously acute standup voice to her own death.

The show was an amazing example of what comedy can be. A way to visit your worst fears and laugh at them. Tig took us to a scary place and made us laugh there. Not by distracting us from the terror but by looking right at it and just turning to us and saying "wow. Right?". She proved that everything is funny. And has to be. And she could only do this by giving us her own death as an example. So generous.

After her set, I asked Mark Flanagan, the owner of Largo (great club, by the way) if he recorded the set. Largo is set up for excellent recordings. He said that he did.

A few days later, I wrote Tig and asked her if I could release this set on my site. I wanted people to hear what I saw. What we all saw that night. She agreed. The show is on sale for the same 5 dollars I charge for my stuff. I'm only keeping 1. She gets the other 4. Tig has decided to give some of that to cancer research.

Tig, by the way, has since undergone a double mastectomy. She is doing well. Her doctors say her chances of survival are excellent. So she went there and came back. Her report from the frontlines of life and death are here for you to... Enjoy.

Please go to my site louisck.com and buy her show. You can buy it here:

Thank you. Have a terrific afternoon.