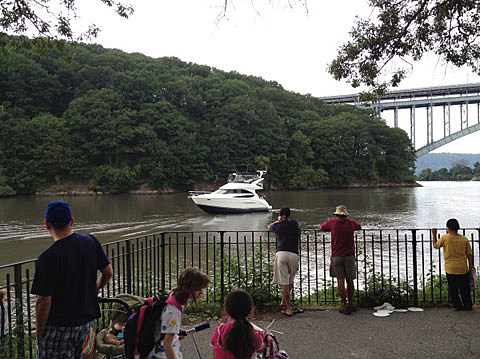 Louis CK fans hanging out in Inwood Hill Park over the weekend got a surprise when they noticed the genius comedian was the not-so-genius who got his boat stuck in the mud...

Comedian Louis "C.K." Szekely, known for his comedy routines and TV shows "Lucky Louie" and "Louie," had his Labor Day weekend joy ride on a yacht cut short when the boat got stuck in the mud off the Harlem River in Inwood Hill Park., according to law enforcement sources.

The funny man was reportedly riding around the island with his two daughters when the boat got stuck in the muck at around 2:30 p.m. Sunday. The boat sat stranded for hours until high tide when it was able to motor away.

Szekely, who lives on the Upper West Side, could be seen standing cross-armed on the deck of the boat with his daughters while waiting for the tide to turn, locals reported." [DNAInfo (via)]

Louis CK recently played three shows at the Bell House, and isn't playing ATP, but is playing lots of other upcoming shows.