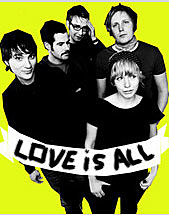 The song by Love is All on What's Your Rupture MySpace page is great. According to Pitchfork, they have at least one more awesome song.

"The jangly post-punk of Sweden's Love Is All was a favorite of late UK radio personality John Peel and is set to make a serious splash on the US indie scene. The band's stateside debut will be released in December on the New York label What's Your Rupture." [Consulate General of Sweden]

"Long before Natalie Portman, there was the NME, that perseverant UK music weekly, introducing you to the bands that would Change Your Life. Bands by the bushel, each hyperbolically better than the ones before. So what better bastion of unabashed bombast than that classy rag to clue you in to Love Is All, the hottest Swedish export since the last thing everyone likened to Ikea?" [Pitchfork]