Love Is All @ Market Hotel (more by Ryan Muir) 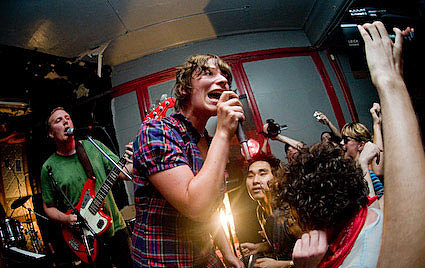 Love Is All are coming back to the US this summer. The band will be playing Hoboken spot Maxwell's on Tuesday, June 2nd (Tickets are on sale), and then three days later - Friday, June 5th they're at Music Hall of Williamsburg. Tickets for that go on sale Friday, May 1st at noon.

The NYC-area shows are part of a June tour that also takes Love Is All to the West Coast with San Francisco's Still Flyin' (who are not currently on the NY dates).

Still Flyin' just released their debut record, Never Gonna Touch the Ground, April 21st on the Ernest Jenning Record Co. label. The label reports that that record was "mixed in Melbourne by Haima Marriott with help from Gus Franklin (Architecture in Helsinki) and Isobel Knowles (ex-AiH)." Still Flyin' last visited NYC in early April, playing gigs at Union Hall and the Cake Shop. They also played SXSW this year (more on that below).

Love Is All's last record was 2008's A Hundred Things Keep Me Up At Night. The band timed this coming tour to coincide with its next release - the Last Choice EP (out June 23 on What's Your Rupture). Frontwoman Josephine writes, "[The EP] features 'Last Choice' from our latest album...as well as five brand new recordings." The band also just put a new covers EP (they did one in 2008 on What's Your Rupture?) on its Myspace.

Check out the video for Still Flyin's "Good Thing It's a Ghost Town Around Here," with album info and art, and a review of SF's SXSW gig, with all tour dates, below...

Still Flyin' - Good Thing It's A Ghost Town Around Here

Crowded as close to the stage as possible, regarding a whirling dervish of dancers, horn players, amateur cowbell enthusiasts, and backup singers, the effect is just as transcendent as [Metallica's] "Sanitarium" was, anthemic malevolence swapped out for outrageously catchy odes to -- well, I'm not clear exactly, but weed and beer are prominently involved.

To this end there is the Guru, who starts the set at the foot of the stage, ensconced in a makeshift pink tent and blasting a smoke machine at his bandmates, until the tent collapses after one song and he settles for stalking the rear of the stage and distributing beers to his bandmates via a fanny-pack device that can hold five brew-dogs at a time at least. Later in the set he goes back to the smoke machine. The one about the ghost town is a highlight. Everyone leaves ridiculously happy. [Village Voice @ SXSW] 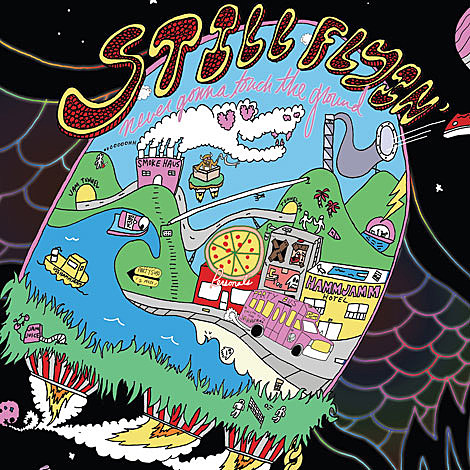