photo by Accidents Will Happen, words by Nick Masi 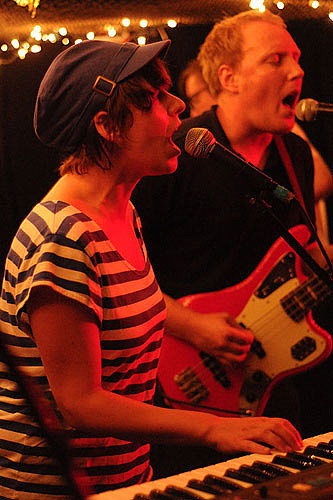 Love Is All played their first of three NYC area shows last night at Cake Shop as a part of the annual NYC Popfest (June 12, 2008). The sold out show had a solid bill and included Oh! Custer, who, like Love Is All, hails from Sweden.

The band played a few cuts off their soon to be released album A Hundred Things Keep Me Up At Night. The songs were great and had that classic Love Is All sound. They also covered A Flock of Seagulls' "I Ran (So Far Away)," which is available on their tour-only covers EP. Nothing compared to the old stuff though! Songs like "Busy Doing Nothing" and "Aging Had Never Been His Friend" got the crowd fired up. As the band came out for the encore, they asked for requests. Their frantic song "Spinning and Scratching" won. and the show ended with lead singer Josephine Olausson joining the crowd on the floor - jumping around, and screaming the lyrics!

Love Is All have two more NYC shows to go - one at Market Hotel on June 14 (tomorrow) and the other on June 16 (Monday) at the Bowery Ballroom. They're also playing a few more places on the East Coast. NYC Popfest continues tonight at Pianos and Don Hill's.