Low in the studio with Jeff Tweedy 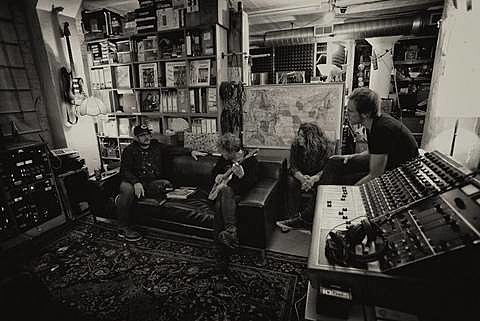 Long-running indie trio Low will release their 10th album The Invisible Way, on March 19, 2013 which will mark the band's 20th year together. The record was produced by Wilco's Jeff Tweedy, and Low's Alan Sparhawk tells how this came to be:

While driving though Chicago, on tour, we stopped finally to visit Wilco at their studio, The Loft. They had invited us to come check it out several times over the years, but this would finally be the day. It's a great place--a sea of instruments in a relaxed, open working environment. It's cool, but what really converted us was hearing the new Mavis Staples tracks they were working on: big, simple, raw, and intimate. Plans were made then and there.

We have worked with many of the great engineer/producers. Jeff Tweedy has been on our side of the microphone for over 25 years, however with engineer (and fellow Grammy winner) Tom Schick, he has of late become a formidable and eclectic producer. He spoke a language we understood, but then took us effortlessly into the mystery.

We've made many records, and you know our M.O.: slow, quiet, sometimes melancholy, and, we hope, sometimes pretty...

How is this different from any other Low record?

- Mimi sings lead on five of the eleven songs (she usually only does one or two, despite being a fan favorite).
- Piano, lots of piano... and an acoustic guitar.
- Songs about intimacy, the drug war, the class war, plain old war war, archeology, and love.

Thank you for your time again and please enjoy what we made. I think it's beautiful.

You can watch a video trailer for the album below. While we wait for the new album, Low have released a six-song live EP titled Plays Nice Places which was recorded at various historic theaters on the bands' April 2012 tour supporting Death Cab for Cutie. Ben Gibbard features on the EP's version of "Words" and you can download the whole thing for free (well, you have to give up your email address) below via a widget. No North American tour dates have been announced yet but there are 2013 European dates which are listed below.