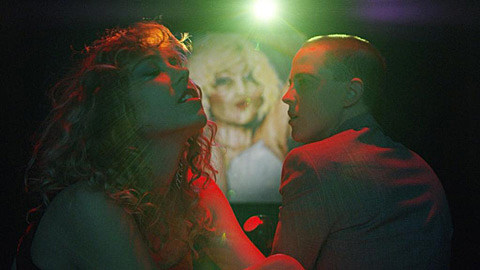 Lower Dens have made a video for "To Die In L.A." which is the first single from their forthcoming Escape from Evil. Directed by SSION's Cody Critcheloe, the video is a mini noir thriller set in the titular city and starring singer/model/scenester Actually Huizenga. Says Lower Dens' Jana Hunter:

The song takes its name from the film, 'To Live and Die in L.A.' and both the song and the film are about something wild, careless, exciting and tragic. The video needed to reflect that. Cody was the obvious choice. The first time I saw him in person, he was on top of a crowd in Monterrey, pelvic-thrusting and singing, as SSION. I fell in love immediately. Who better to translate this ode to reckless firebrands.

As mentioned, Lower Dens will celebrate the new album with a few shows, including Baby's All Right on March 31 which is the LP's release date and is now sold out. Lower Dens will be on a more proper tour this summer, with another stop in NYC at Music Hall of Williamsburg on June 11 which is part of the Northside Festival. Tickets for MHOW go on sale Friday (2/27) at noon with an AmEx presale starting Wednesday (2/25) at noon.

The summer tour hasn't officially been announced yet, but all known dates are listed below...