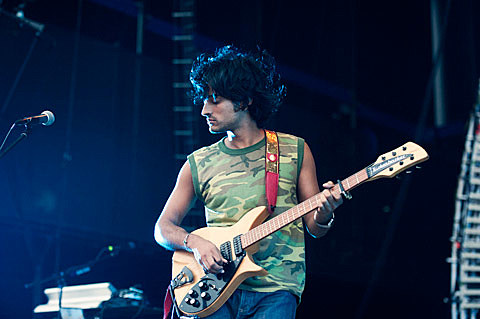 The record label David Byrne started in 1988, Luaka Bop, has been curating the club John Zorn started, The Stone, since December 15. If you've been paying close attention to What's Going On posts, you may have noticed more familiar names on the lineups lately (like Lucky Dragons and Kelly Pratt who have both played so far).

The curation continues through the end of the month. Tonight (12/20), Anand Wilder of Yeasayer is playing with Steve Marion of Delicate Steve, and Austin Fisher of Suckers, performing songs they've written specifically for tonight's performance. Steve leads his own group at the venue on 12/27 with members of Banned Books. Also tonight, George Langford and Tom Van Buskirk of Javelin and friends are playing. Those friends include Ahmed Gallab of Yeasayer, Powpow of Man Man, and Miho Hatori of Cibo Mato. According to George, it's going to be an "electronic drum circle rave cave."

On Thursday (12/22), Sleepy Doug Shaw/Highlife is playing. On Friday (12/23), The Present, lead by Rusty Samtos Rusty is playing the venue. Rusty is a singer/songwriter and has produced Animal Collective, Panda Bear, Born Ruffians, Owen Pallet, and others. On 12/28, Hubble (aka Ben Greenberg of Pygmy Shrews and Zs), and on 12/29 it will be Marc Ribot and David Hidalgo.

The Stone will also host their annual end of the year improv party on December 30 and 31 with tons of musicians and special guests including Thurston Moore, John Zorn, Jeremiah Cymerman, Sam Kulik, Ned Rothenburg, Eyal Maoz, David Fulmer, and others. Starting at 11 PM on 12/31, Spiritual Unity (which features Marc Ribot) will perform a ritual/jam that leads through a midnight rendition of Albert Ayler's "Bells."

Check out the full December schedule and more details on these shows at The Stone's website.

Javelin also have a show coming up on 2/24 at Glasslands with Pat Jordache.