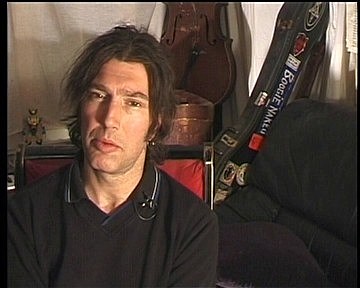 Stu Spasm of '80s/'90s-era Australian noise rockers Lubricated Goat (who had releases on AmRep, Sub Pop and other labels) now has a new band, Art Gray Noizz Quintet. They initially formed to play an afterparty for a screening of AmRep documentary Color of Noise, but have decided to keep playing shows. Here's what Stu tells us:

The Art Gray Noise Quintet was originally formed to play at the after party for a screening of the 'Color of Noise' which is Eric Robles' movie about Amphetamine Reptile Records. Eric thought I had a functioning lineup of Lubricated Goat but I have officially ended playing under that name. If I had I'd have been the last Am Rep band still stupid enough, certainly not rich enough to attempt to function in New York. So,it was obvious I must assemble a super group of the finest noise Noise Rockers New York had to offer and knock the punters sox off at the party but just a one off, I was also determined to get the notoriously shy Tom Hazelmeyer to jam at what was essentially a film honouring his achievments in the heady days of 90s Rock. My main man drummer "Bloody Rich" Hutchins was away, so I enlisted drummer Jay Jay Meraz who did a great job but is still pissed off at me for having to abdicate the drummer's seat on Rich's return. Next I recruited Ryan Skelleton Boy, who just as LeadBelly was the King of the 12 string guitar, is himself the King of the two String Bass. Then came guitarist Andrea Sicco of Twin Guns, not only does this free me up when I'm singing, but when our guitars merge it forms a most piquant Aural Melange. Last but not least was Johhny Scuotto, who originally filled in on bass at one rehearsal yet is talented in so many ways that he was given carte blanche to do whatever he wanted thus he plays synthesizer and metal percussion and also vies with Skelleton Boy for the title of skinniest man in New York. I christened the ensemble the Art Gray Noizz Quintet, having laboured under the name Stu for most of my life only to discover the much cooler name of Art was hiding on the end all along, a new name for a new band. Although the band was only going to play once, people seem to like this combination of people so much that they demanded we play more so we've decided to play occasionally when the right thing comes up. We have some great material some instrumental some choice covers and some, well come and see for yourselves......Cheers, Stu......I mean Art.

They played Brooklyn this past March at Passenger Bar, and now have another show coming up here happening this Sunday (5/24) at Grand Victory. Also on that bill is Ballroom, MJ Halloran and Austin Parish. Tickets are on sale.

When Stu and his band were preparing for the first show, part of the rehearsal was filmed and video has since come out of them playing Lubricated Goat's "Nerve Quake." Watch that, with the show flyer for Grand Victory, below... 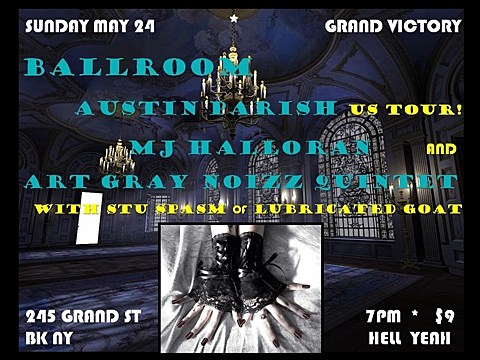