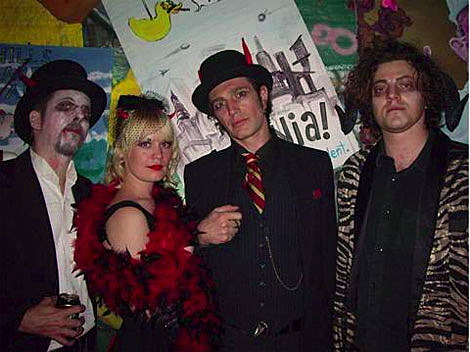 "Lubricated Goat was an Australian noise rock band of the 1980s. They achieved brief notoriety for playing on a television program naked, with only their instruments. Mainly influenced by bands like The Stooges and The Birthday Party, they are credited for playing a grimy, confrontational style of rock which preceded grunge music....

Lubricated Goat was formed by Stu Spasm (real name Stuart Grey). Spasm had previously been in bands such as Singing Dog with Stu Barker, and Salamander Jim with Tex Perkins....

Lubricated Goat had its back catalog re-released via Amphetamine Reptile Records in the United States, and on Normal in Europe, before making its first American tour in mid-1989. In 1990, Lubricated Goat commenced its first European tour, one that was plagued with tragedy via the stabbing of Spasm in Berlin in 1990. The incident placed Lubricated Goat on hiatus....

Lubricated Goat holds a special place in my heart due to one recent, not-music-related experience, A few years ago I hired a 'man with a van' off Craigslist to help me move. That man turned out to be none other than Stu Spasm. I felt star struck that entire afternoon. The company he was/is working for is Rabbit Movers.

So, I was excited, but not surprised, to see that not only are Lubricated Goat playing a show tonight (5/8), but that the show (which other bands are also playing) is taking place in the Rabbit Movers-related Rabbit Hole Studio gallery in conjunction with their own art show entitled "Patti Smith's Fridge" because "One time they moved Patti Smith's cast-iron refrigerator down three flights of stairs and into a building across town". Junk Science is also on tonight's bill. Seven bands total play today and tomorrow (set times below).

The three day event this weekend in DUMBO (Brooklyn, NY) will feature art, live music, readings and performance, or to quote them, "all sorts of shenanigans from the Rabbit Art Collective". More details below... 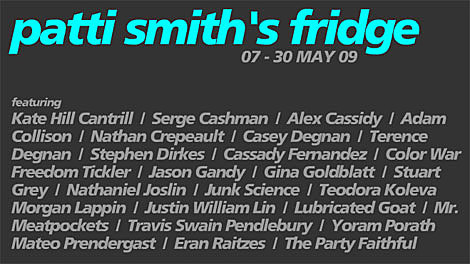 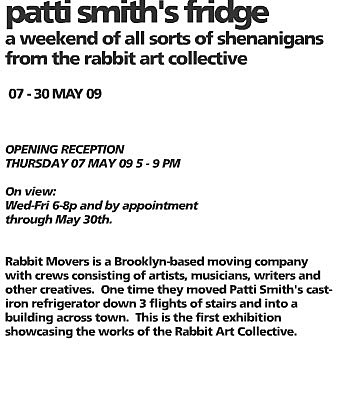 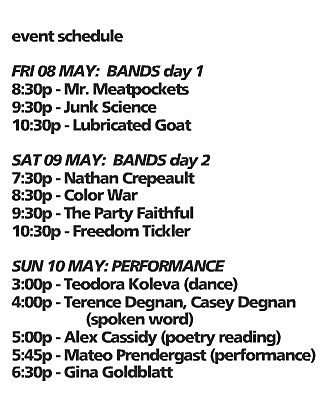