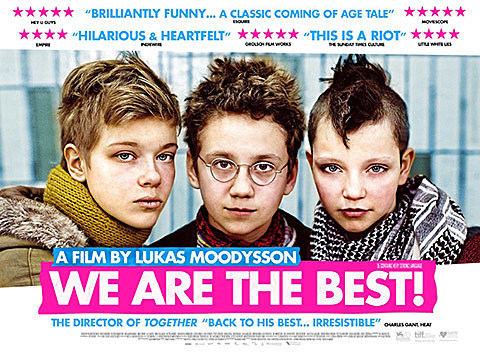 Swedish director Lucas Moodyson doesn't stick to one style or subject matter. His films include the funny/sweet Together, as well as the bleak/disturbing Lilya 4-Ever. His latest is We Are the Best! about an all-girl teenage punk band:

An affectionate, retro-fantastic time capsule of early-1980s Sweden, the film follows the spiky-haired trio as they fight the system one shambolic, three-chord anthem at a time, all building up to an exuberant, fist-pumping finale.

You can watch the trailer below. The film is getting a limited US release starting May 30 but folks in NYC can catch an early screening at BAM's Rose Cinemas in Brooklyn on May 7. Moodyson will be in attendance for a post-screening Q&A and tickets are on sale now.

In conjunction with the We Are the Best! screening, BAM is presenting a film series, "Punk Rock Girls," in May that is showing a lot of cool films, including... 1980's terrific Breaking Glass (starring new wave singer Hazel O'Connor and Quadrophenia's Phil Daniels) on May 14; 1982 Australian film Starstruck (by Gillian Armstrong who made My Brilliant Career) on May 15; 1980 cult classic Times Square on May 21; and Dennis Hopper's 1981 film Out of the Blue on May 22.

There's more: the highly subversive (and highly underrated, I'm serious) Josie & the Pussycats on May 29; a collection of punk shorts (by the likes of Beth B and Richard Kern) called "Popularity is Boring" on May 29; sci-fi new wave classic Liquid Sky on May 30; Derek Jarman's phantasmagoric dystopian fantasy Jubilee on May 30 & 31; Diane Lane, Laura Dern (plus The Clash's Paul Simonon and Sex Pistols' Steve Jones and Paul Cook) in Ladies & Gentlemen The Fabulous Stains on May 31; and Madonna's big screen debut, Desperately Seeking Susan, on June 1.

Tickets for all screenings in the "Punk Rock Girls" series are on sale via BAM's website. Trailers from all the films in the series are below...

WE ARE THE BEST! Trailer

Out of the Blue - trailer

Josie And The Pussycats Trailer