DOWNLOAD: Lucero - What Else Would You Have Me Be (MP3) 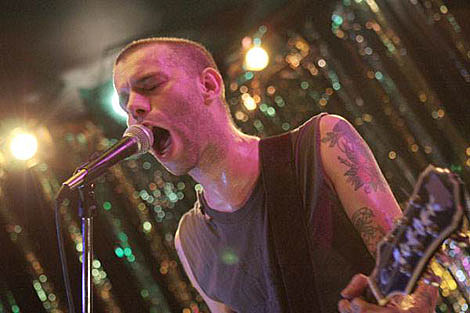 Lucero is being featured on a new MTV show called "$5 Cover." The semi-fictional "musical drama" is set in the Memphis music scene and co-stars Lucero singer Ben Nichols, who plays himself. Craig Brewer, director of Hustle & Flow, is heading the project. Lucero has two songs on the show's soundtrack (both previously released) available as downloads through Rhapsody. "The show plays Fridays at Midnight ET starting May 1st". Soundtrack tracklist and videos from the show below.

Lucero is from Memphis, but you wouldn't really know it from how many NYC shows they play. The band visited NYC for a three-night run in January, playing two nights at Terminal 5 and one at the Mercury Lounge. Then, they visited for a pre-St. Patty's Day show with the Pogues in March. And a month later Lucero played a sold-out show at the Music Hall of Williamsburg with Titus Andronicus. Ben Nichols played a solo show here in October.

Well, they're about to be on tour again. The band will come to New Jersey club Maxwell's on Friday, June 12th. Tickets are on sale.

Nichols just released his first solo disc, The Last Pale Light in the West, in January. The band is expected to put out a follow up to 2006's Rebels, Rogues & Sworn Brothers sometime this year on its new label, Universal Music Group.

A trailer and press release for "$5 Cover," an interview with Ben Nichols on his role, and a clip of Lucero performing "San Francisco," plus all tour dates, below...

"$5 Cover" Soundtrack Brings the Memphis Music Scene to You

New York, April 23rd, 2009 - This May, MTV will present "$5 Cover," a musical drama set in Memphis, Tennessee, and stars the hottest up-and-coming Memphis artists playing themselves as they fight for love, inspiration and money to pay the rent. The series explores the modern-day incarnation of the city's historic music scene through the lens of Memphis-based filmmaker Craig Brewer, acclaimed director of "Hustle & Flow." Fans will have full access to all the music and artists they discover through "$5 Cover" with the release of the series' soundtrack, available exclusively in digital formats, on Tuesday, April 28.

As both a long-form rock musical and 15-part series, "$5 Cover" re-invents the music video format, combining real-life drama with the grit of Memphis. The historic musical city has been home to deep cultural exchanges as well as painful culture clashes, but the birthplace of the blues, gospel and rock 'n' roll has always been a town with a thriving music scene, where people from every walk of life embrace every genre of music - and "$5 Cover" offers music fans a insider's look at the playlist that makes the city so legendary to this day.

The album, which features eight previously unreleased tracks, explores a wide range of musical genres. From the crunk stylings of Al Kapone, whose "Whoop That Trick" was featured in "Hustle & Flow," helping put him on the national map, to the enchanting sounds of songstress Amy LaVere, listeners will be exposed to the full complement of musical offerings that make Memphis the hotbed of music talent it is today.