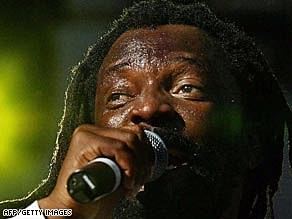 The men were arrested Sunday in an area east of Johannesburg and will appear in court on Tuesday, police spokesman Eugene Opperman said.

Along with murder, Opperman said the men were charged with possession of stolen property, a charge unrelated to Dube's death. Opperman said police seized two stolen firearms and four vehicles, including the one used on the night Dube was shot.

The 43-year-old musician was killed Thursday night as a hijacker tried to steal his car, his record company said. Dube was dropping his children off at a relative's house at the time; he attempted to escape but died almost instantly from his wounds, Gallo Record Company said. [CNN]