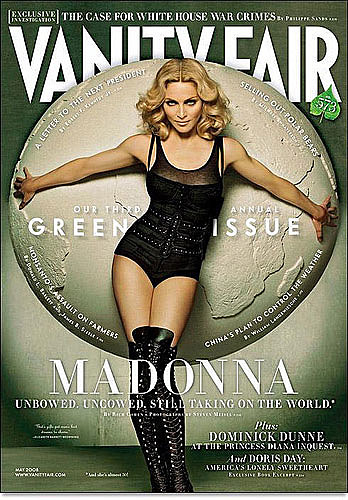 Maybe it's just me, but I wouldn't have put "lucky" in the same sentence with "need to lineup outside of Roseland" and "receive tickets on a first come basis".....

Historic Event Presented by Verizon Wireless, Control Room and MSN; Show to Be Broadcast Live on MSN.com (music.msn.com) April 30th in the US and May 15th ex-US; New Madonna CD 'HARD CANDY' Scheduled for April 29th US Release

NEW YORK, NY--(Marketwire - April 14, 2008) - In celebration of the release of Madonna's upcoming CD 'HARD CANDY,' Control Room, MSN and Verizon Wireless will present the one and only Madonna live at New York's famed Roseland Ballroom on Wednesday evening, April 30th, it was confirmed today by Warner Bros. Records. The Control Room-produced show will be available live on MSN Music In Concert (www.music.msn.com) on April 30th in the US and on May 15th ex-US.

Verizon customers will be amongst the handful of lucky winners who will attend the show. Other lucky fans will need to line up outside of Roseland to receive tickets on a first come basis. This special event will be the first time Madonna will debut songs from her hotly anticipated new album 'HARD CANDY' which is scheduled to arrive in stores on April 29th.