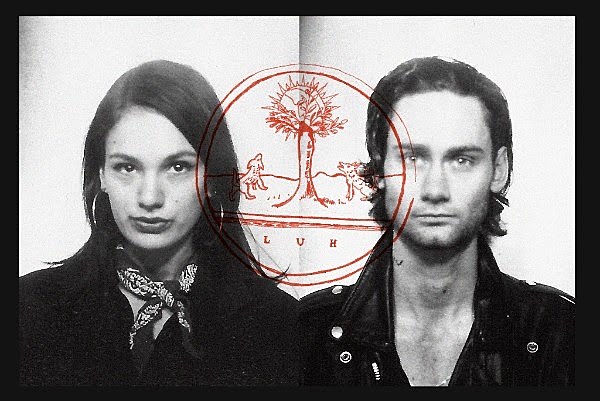 LUH. (aka former WU LYF singer Ellery James Robert and Ebony Hoorn) recently released their excellent Haxan Cloak-produced debut album Spiritual Songs for Lovers to Sing on Mute. Here's some of what we said about it:

It’s an interesting coincidence that this comes out the same day as the ANOHNI album, because both actually hit a very similar spot. Both are albums from singular vocalists delivering passionate, heartfelt singing over pounding, forward-thinking production. Both demand your close attention and they have the ability to stop you in your tracks if you aren’t giving it.

Like WU LYF’s album did, Spiritual Songs quickly establishes itself a sound but it even more quickly deviates from it. “$ORO” is a swamp of auto-tune that sounds more like Yeezus than most rap does. “Loyalty” is a mostly-drumless ballad that spends its second half wallowing in weepy string arrangements. The band’s eponymous song “Lost Under Heaven” (that’s what LUH stands for) is Ellery and Ebony’s unique vision of what shoegaze could’ve sounded like.

It was already revealed that the band would be coming over to the US for Pitchfork Festival, and they'll also play a BrooklynVegan-presented NYC show on July 15 at Mercury Lounge before that fest. Tickets go on sale Friday (5/20) at noon with a BrooklynVegan presale starting Wednesday (5/18) at noon. Check back here Wednesday morning for the password.