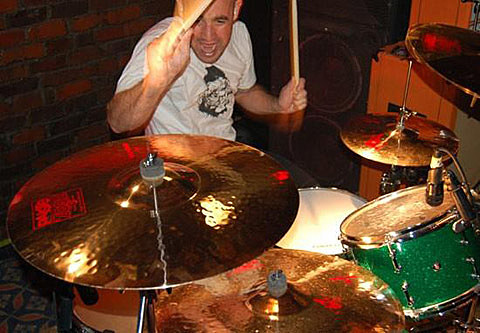 Hi Folks,
My name is Luke Abbey and I'm the drummer for the band Gorilla Biscuits. Recently, while we were playing in Chicago at the Revelation Records 25th anniversary show, I tore my biceps tendon. I'd already had a number of shoulder and arm injuries I'd been trying to manage on my own, but during our second song it finally gave out and completely snapped, forcing me to go in for surgery the following week. I underwent several repairs and am now embarking on a lengthy rehabilitation process while also facing considerable expenses.

Luke Abbey (Warzone, Judge, Gorilla Biscuits & more) is auctioning some impressive classic New York Hardcore from his collection, including 7"s by Side by Side, Slapshot, Underdog, Warzone, much sought-after compilations, rare shirts by Judge, Uniform Choice, and more. Head to Double Cross XX for more details and to his eBay account to place bids.

Best of luck and godspeed to Luke Abbey, though I'm guessing he won't need too much of it judging by his bounty.