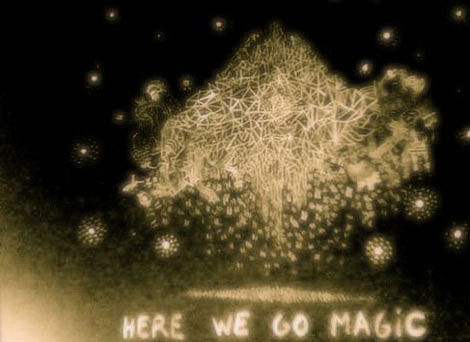 "To date, Luke Temple has been unconfined by genre. His full-length debut Hold a Match for a Gasoline World presented heartfelt folk tunes and expansive pop numbers filtered through a unique outsider perspective. Last year's follow-up Snowbeast was an avant statement full of interwoven light and dark imagery recorded entirely in his Brooklyn bedroom.

Developed over a two-month period of stream-of-consciousness recording in Greenpoint, Brooklyn, Luke's self-titled debut under his new moniker Here We Go Magic is a remarkable departure from his signature singer-songwriter material. Luke recorded the album at home using analog synths, a cassette 4-track, and his trusty SM-57 mic, coloring the sound with warmth and creating textures you want to wrap yourself in." [says Luke's PR/bio]

The rebranded Luke Temple has a bunch of shows coming up including some with Department of Eagles which includes the sold out show at Bowery Ballroom on January 19th. There's also February 15th at Southpaw, March 3rd at Le Poisson Rouge, SXSW, and a whole bunch of non-NYC/Austin dates across the country, BUT FIRST the old-original-actual Luke Temple will be playing a solo show tonight, January 16th, at Le Poisson Rouge with Jonah Smith.

Definitely check out the three tracks streaming at MySpace. All dates below...