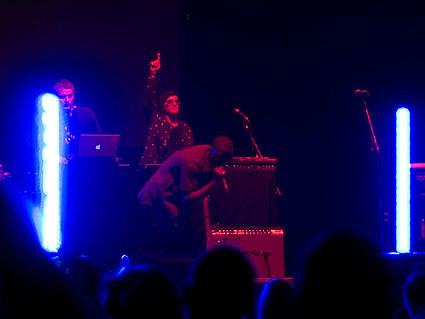 The Lupe Fiasco one-off, record-release show at Irving Plaza is this Tuesday December 18th. Then he's taking a Hawaiian vacation, and then he'll start a tour in January that will eventually bring him back to NYC on February 2nd for a show at Nokia Theatre. Tickets for that one aren't on sale yet, but they are for a lot of other dates.

Lupe (and Jill Scott) was also just nominated for a Grammy. Does he care that much?

Nah. I was thinking about this one, though, I was kind of pondering the importance of a Grammy nomination. It can really affect sales and things of that nature. We’ll see if I win one. It’s starting to be the little things that matter to me. Like, last night I got invited out to see The Cult, with Ian Astbury, and he shouted me out on stage. I’m a big fan of Ian Astbury. I think The Cult is a little bit before my time, but I’m a big fan of Ian Astbury’s due to a lot of the stuff he’s done with UNKLE. So, yeah, it’s more those little things and occurrences, which are the milestones. Like, “Frank Sinatra went over to Sammy Davis Jr.’s house and they had a barbeque.” It’s starting to be like, “Damn, guess who I was just with yesterday?” I got a chance to perform with UNKLE, which was phenomenal. It was with a live band, we were all in Vegas. Some people might be like, “Who the hell is UNKLE?” But for me it’s like, “Damn.” Those are the stories I’m gonna tell my kids. [Lupe to the Village Voice]

This is the part where I was going to post Lupe's entire new album for you to download for free, but then I read THIS, so you'll have to just stream it instead. All dates below....