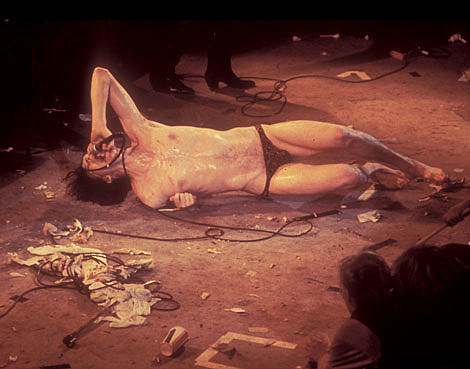 The Daily Swarm site has updated their initial post with an official statement (that seconds after I posted this I also received in my inbox from a reputable source):

Lux Interior, lead singer of The Cramps, passed away this morning due to an existing heart condition at Glendale Memorial Hospital in Glendale, California at 4:30 AM PST today. Lux has been an inspiration and influence to millions of artists and fans around the world. He and wife Poison Ivy's contributions with The Cramps have had an immeasurable impact on modern music.

The Cramps emerged from the original New York punk scene of CBGB and Max's Kansas City, with a singular sound and iconography. Their distinct take on rockabilly and surf along with their midnight movie imagery reminded us all just how exciting, dangerous, vital and sexy rock and roll should be and has spawned entire subcultures. Lux was a fearless frontman who transformed every stage he stepped on into a place of passion, abandon, and true freedom. He is a rare icon who will be missed dearly.

The family requests that you respect their privacy during this difficult time.

Wikipedia was also updated moments about with "Erick Lee Purkhiser (October 21, 1946 - February 4, 2009), better known as Lux Interior, was an American punk rock musician and a founding member of the band The Cramps. He died on February 4, 2009. Early reports are stating that he died from auto-erotic asphyxiation."

Sadly it looks like the only thing not true is the "last weekend part". RIP LUX.
Videos below..