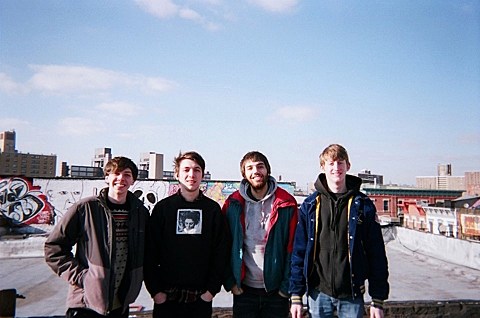 LVL UP is an indie rock four-piece, who notably shares two members with Spook Houses, and one with Sirs. Their debut full length, Space Brothers, came out in early 2012 via Evil Weevil and they're set to follow that with the Extra Worlds 7", which is due out on April 6 via Double Double Whammy. You can stream the scrappy rocker, "Graveyard," which will appear on that 7", at the bottom of this post. Meanwhile, we've also got the premiere of the video for "Nightshade" off of Space Brothers, a slow-burner that sees co-frontman Nick Corbo howling like Jeff Mangum over chords that sound better fit for a Built to Spill record. It's a solid cut and you can watch the video below.

Last Friday (2/8) during the snow storm, I wandered into a Purchase College apartment (which the members attend/attended) to catch LVL UP packing in some kid's living room, with about 90% of the crowd moshing and shouting the words. They'll be taking that raucous live show on the road this month for a few Northeast dates, including one in Brooklyn on February 23 at Shea Stadium with Krill, Porches, Butter the Children, and High Pop. A list of all dates, which includes shows with Waxahatchee, Eternal Summers, Joyce Manor, and others, is below.

LVL UP- "Nightshade" [Official Music Video] from House of Nod on Vimeo.