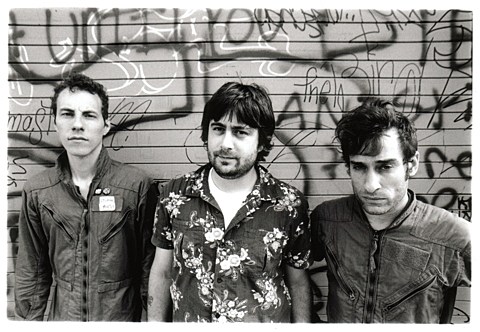 Back in the '90s/early '00s, an art punk band by the name of Challenge of the Future existed in NYC, and upon their breakup in 2001, guitarist Nick Zinner went on to focus entirely on his other band, Yeah Yeah Yeahs (maybe you've heard of them), and two other members, Aaron Diskin and Simon Marcus, formed Lycaon Pictus. (Aaron also plays in Klezmer punk band Golem.) Lycaon Pictus released three full lengths since forming, and after having taken a four year break, they're set to return this year with their fourth album. A title and release date are still TBA, but the band have revealed their first new single, "I Give You A Rose," a cut indebted to the manic art punk of Pere Ubu and the repetitive layering of David Bowie's "Heroes." You can download that song above or download it below.

The band also appear live as themselves performing that song in the new Austin Chick-written/directed film Girls Against Boys (starring Danielle Panabaker, Nicole LaLiberte, and more). That film is in theaters now and you can see it in NYC at Quad Cinema. Trailer video below.

Meanwhile, the other post-CotF project, Yeah Yeah Yeahs, have a new album coming out this year too.

Lycaon Pictus - "I Give You A Rose"