the current issue of FADER 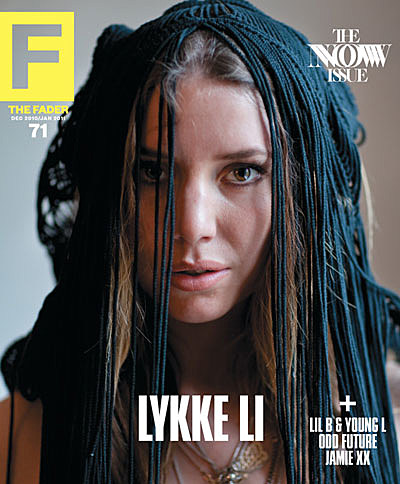 It's all about Lykke Li all of a sudden. There she is on the cover of the new issue of FADER which has appeared not long after the recent release of her new single and video which was followed by the announcement that she...

"...is set to release her highly-anticipated sophomore album, Wounded Rhymes, on her label LL Recordings on March 1st, 2011. Produced by Bjorn Yttling of Peter, Bjorn & John and recorded in Stockholm, Wounded Rhymes is the follow up to Lykke Li's critically-acclaimed debut, Youth Novels.

And that album release comes with a May tour which came with a May 17th Webster Hall show which must be close to selling out because she added a May 18th show at the same venue (it goes on AmEx presale Wednesday at noon).

On top of all that, Lykke is now in NYC for a one-off, pre-tour, pre-album, very-sold-out show at Le Poisson Rouge which goes down tonight, 12/1, with the recent addition of DJ Scribe on the bill. AND, we spent some time in the past few days prepping an interview which we'll be conducting along with a video team from Kanon Organic Vodka who are sponsoring both the show and the afterparty which Lykke Li is DJing at SoHo Grand Hotel after the show. Stay tuned for that along with pictures and a review from LPR.