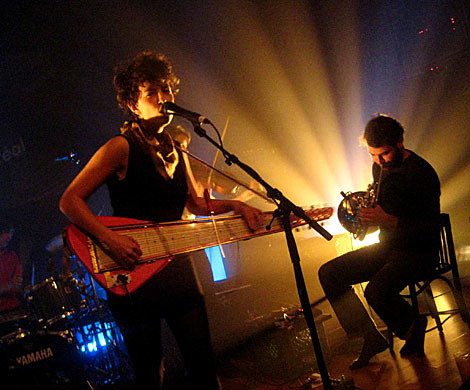 M for Montreal is an interesting festival, at times more like a conference or summer camp or one of those all-inclusive resorts -- but with better music. There are about 40 "international delegates" (of which I am one) who basically spend the whole weekend together, going to panel discussions, cocktail hours, dinners and, of course the nightly shows. It's not like SXSW or CMJ where there are 30 shows happening at the same time - we delegates see every band at M for Montreal.

Take opening night's (11.19) Selection Officielle at Juste Pour Rire. The venue is used mainly as a comedy club, but they have shows there too with a great soundsystem and, as You Say Party! We Say Die! singer Krista Leowen noted, "fancy lights" which have made it possible for me to take at least one non-embarrassing picture of each band with my crappy point-and-shoot. (Again, apologies to BV's many awesome real photographers.) Juste Pour Rire has two rooms -- the Bowery-sized Cabaret and the slightly smaller Studio, and while one band was playing in one space, the next band sets up, so there's little or no downtime between bands, apart from the time it takes to herd the audience from one place to the other.

While being industry-oriented, M for Montreal is open to the public and tickets to individual events are cheap. ($12.75 for individual nights.) And the public does come -- the place was packed and going bananas for Think About Life's headlining set. Having seen TAL a bunch of times in New York (including at the BV official CMJ showcase this year), even shows like the fairly off-the-hook one at Arlene's Grocery during CMJ last month -- it just doesn't compare to watching them with a hometown crowd. This line-up is still pretty new. Drummer and founding member Matt Shane left the band in October to go back to school, with Greg Napier taking over. More significantly, the band added a second singer, Caila Thompson-Hannant of Shapes and Sizes, to the fold, and she and Martin Cesar have great chemistry.

The band played almost all of their great new album, Family, which is slowly starting to catch on down here in America. Pitchfork may be going gaga for "Having My Baby", but the Montreal crowd knew there are even better songs on the album. "Johanna," "Young Hearts" and "Set You on Fire" all had the crowd bouncing off the walls, some of which the band trotted out a horn section for, but it was Family's "Sweet Sixteen" that sent them over the edge. Though maybe that had something to do with special guest vocalist Cadence Weapon who clearly knew all the words. Think About Life may or may not make you think about life, but they will make you forget your troubles while they're playing. 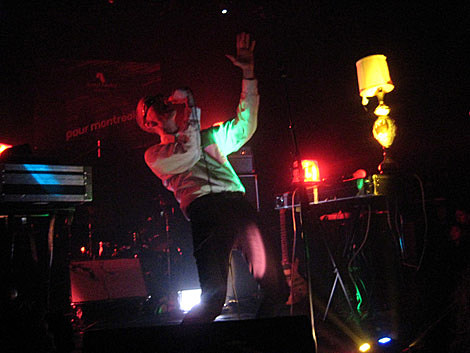 Think About Life guitarist Graham Van Pelt had double-duty that night, using M for Montreal to debut new material from his solo project Miracle Fortress. His 2007 album Five Roses was a Polaris Music Prize nominee and won over a lot of American fans too with its lush Brian Wilson vibes. Those expecting more of the same will be in for a shock. Judging from his show, the new album (not due out till mid 2010) will be more influenced by The Bronski Beat than The Beach Boys. Surrounded by keyboards, table lamps and police turret lights (but no other band members), it was a one man dance party with Van Pelt manning his own light show while belting out falsetto electropop/house. There's still a focus on lush arrangements and melody, but this time Miracle Fortress is clearly aimed at the dancefloor.

The other highlight for me Thursday night was getting to see The Luyas who are really unlike anything else going right now. They almost defy easy description. The closest I came up with was "Joanna Newsom fronting Mercury Rev" which at least gets you near the right ballpark. Singer (and member of Miracle Fortress when Graham isn't playing solo) Jessie Stein's voice has a child-like quality to it, and the band can go from intimate to epic and joyous within a song. There's unusual instrumentation too -- Pietro Amato's french horn is integral to their sound, and Stein is the only person other than the Liars Aaron Hemphill that I've seen play a Moodswinger. All these disparate elements shouldn't work together, but they do... and gorgeously. The Luya's 2007 debut, Faker Death, is good but the new material they played last night was even better. The band's new album is due in early 2010 and could be a real stunner.

It's not all Montreal bands at M. Toronto's Rural Alberta Advantage played a winning set of dusty indie folk. Like a lot the bands here tonight, they are better live than on record and even a more electrically-inclined person like myself was won over by their warm-hearted set, even when the songs were about rock slide disasters.

Vancouver's You Say Party! We Say Die! drove something like eight hours out of the way of their current Canadian tour just to play the festival and their set -- mostly from new album XXXX -- was a lot of fun. I'd never really listened to them before, I'll be honest, but their new wave dance pop is pretty easy to get into, and they are fun to watch, like CSS if they preferred minor keys and harbored a secret love of The Motels. (By the way, their label Paper Bag just released their seventh anniversary all-covers compilation which you can download for free. YSP!WSD! do Rikk Agnew's "Falling Out.")

Opening the night were Montreal's Final Flash which contain members of The High Dials and Black Diamond Bay. They are clearly descendants of The Dears, with a glammy, melodramatic sound that reminded a bit of Suede... though Final Flash aren't quite epic enough to be awesome. Not yet at least. Not bad though.

One night earlier I caught Red Mass as the M pre-party. More dodgy pictures taken by me from the actual opening night, plus tour dates and live video from The Luyas, Miracle Fortress, and YSP!WSD!, below... 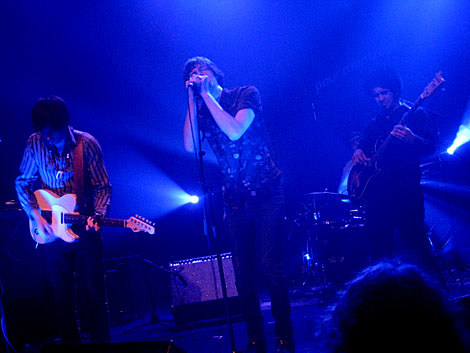 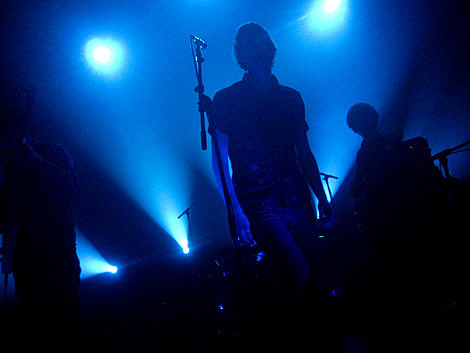 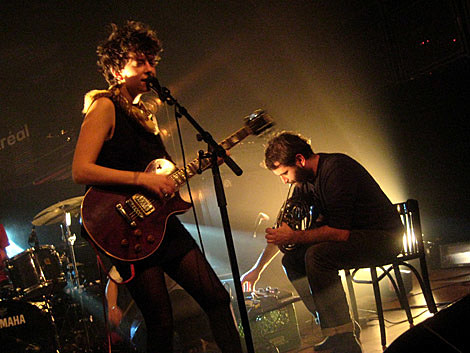 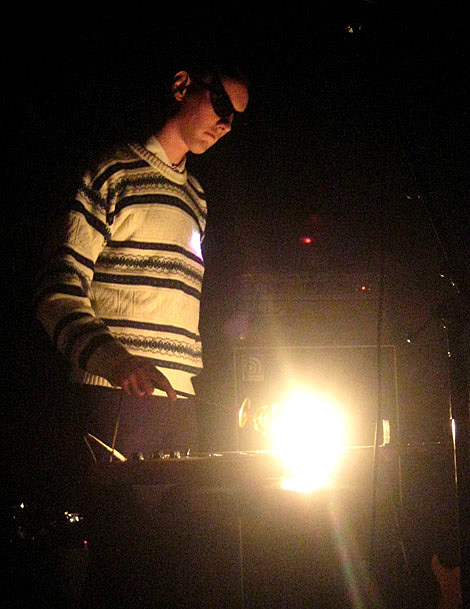 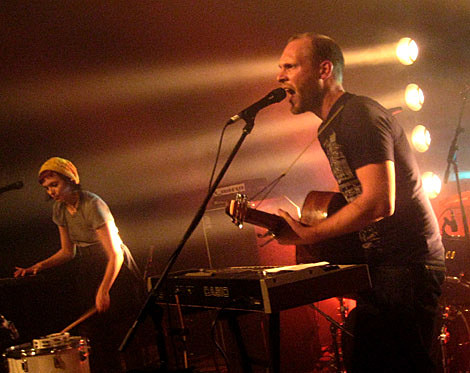 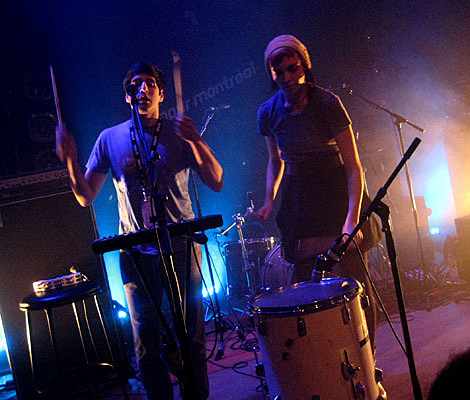 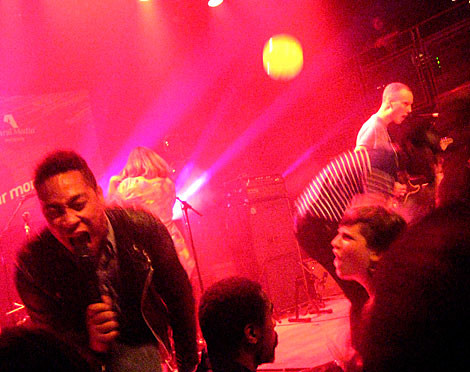 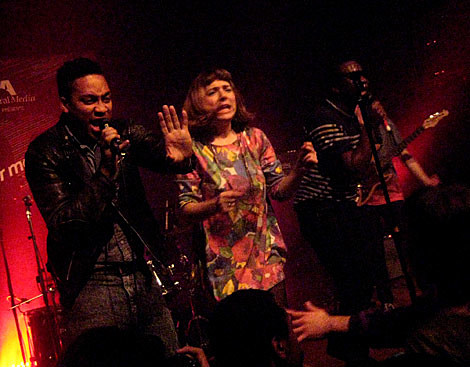 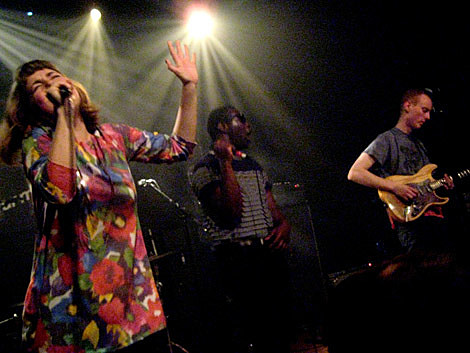 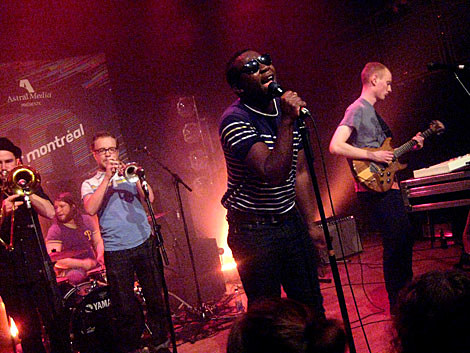 You Say Party We Say Die 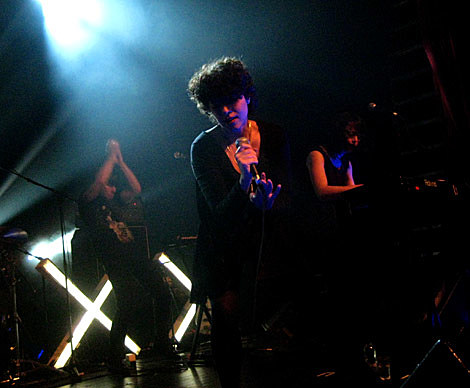 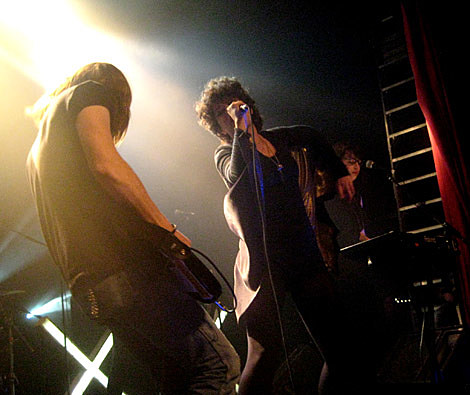