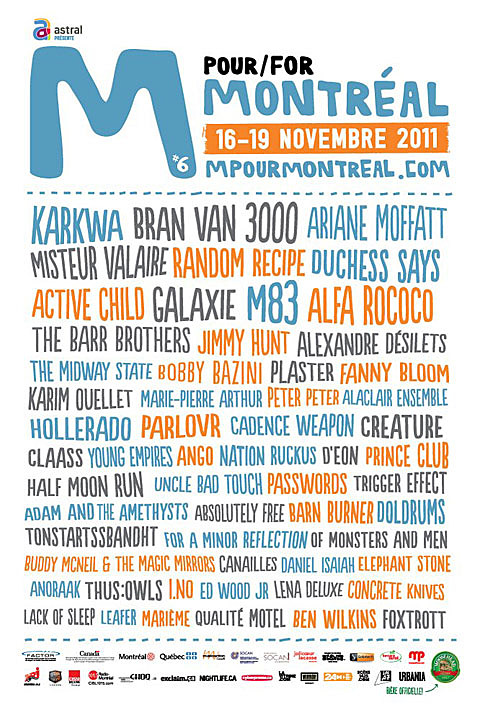 As I mentioned briefly yesterday, I'm heading out to the M for Montreal festival which happens tonight through Saturday (11/16 - 19). This is the 6th Edition of the fest, and the fourth that I've attended. Once a showcase for up-and-coming Montreal bands that the festival organizers deemed "export-ready" and that took place primarily at one club (the two-stage Juste Pour Rire), M4M has expanded to include other parts of Canada in the last few years.

Juste Pour Rire closed shortly after last year's festival, so this year has expanded to other venues while also widening in scope. They've partnered with other international festivals (Osheaga, CMJ, SXSW) and have more bands than ever (including a few not from Canada). Bands this year include M83, Karkwa, The Barr Brothers, Active Child, Bran Van 3000 (remember "Drinking in L.A."?), CLAASS, Misteur Valaire, Anoraak, Random Recipe and the debut of Absolutely Free, the new band from 4/5s of  DD/MM/YYYY. Full line-up is here.

In total there's nearly 60 bands playing, which might not seem like a crazy amount for a festival. But M for Montreal is designed with little to no overlap, so if you attend the whole thing you see all the bands. It's going to be a busy week.  Look for more coverage (including my lovely point-and-shoot photography) coming later this week.