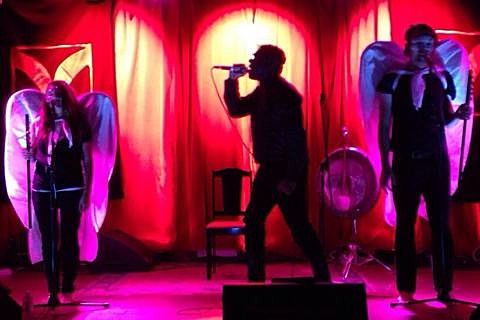 Here I am again at M for Montreal, the now eight annual edition that is part music festival and part industry conference. Right now it is more of the latter, with "international delegates" (of which I am one) in from around the world attending panel discussions, sanctioned schmoozathons and seeing the night's "official selection" of bands. Over the weekend it becomes M Fest and more resembles CMJ or Pop Montreal, with bands playing at a variety of clubs across the city.

Last night six bands played in the "official selection" at Casa Del Popolo and La Sala Rossa which is right across the street. The night started at Casa with Dusted, a new-ish project from Holy Fuck's Brian Borcherdt and drummer Leon Taheny. With Dusted, Borcherdt trades electronics for a more traditional rock format. Though the setup usually means bluesy garage, Dusted are much more atmospheric and emotive. The set started a little rocky, but the duo found their footing and the last couple songs were quite good. You can stream Dusted's debut album, Total Dust, below. 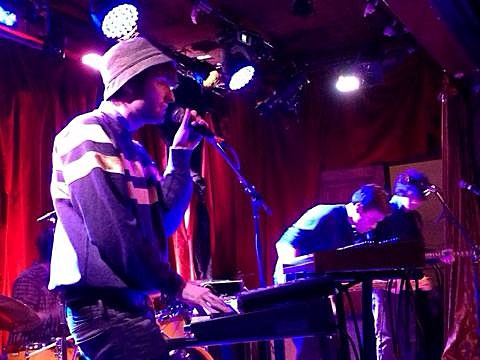 Shuffling over to Sala Rossa, it was very new, very young MTL band Seoul, who I was told had formed just a few months ago and had played less than 10 shows total. Dominick had caught them at Pop Montreal last month and told me they were good and I might like them and I did. "I hear there are a lot of people in from out of town," the keyboardist told the crowd. "Just like a bar mitzvah. Please enjoy our special day." Young they may be, but they really seemed to have it together, making airy, crystaline pop that was funky and soulful in an '80s kind of way. Wild Nothing is an obvious current comparison but my mind drifted to actual Reagan-era Prefab Sprout and The Blue Nile. You can stream "Stay With Us," the only song they've offered up the public so far, below.

Back at Casa, it was Black Atlass, aka Montreal based Alex Fleming who is a neo-R&B crooner, a la Sampha, Sam Smith, or The XX. The performance was just Fleming and a guy providing the beats, and I liked the production work in general (it's on the lo-fi side, but never what I'd call murky) but am not a fan of shows like this and it takes someone with supercharisma to pull it off. Black Atlass' video for "Paris" is below.

I don't know if I'd call what Majical Cloudz singer Devon Welsh has "supercharisma" but his performance style is utterly magnetic and had the liquored-up crowd of industry folk hushed for their entire set. Welsh's performance style almost borders on spoken word, punctuating accented sylables with a downward stab of his clenched fist, and sometimes stomping, not so much for percussion as emotion. Intense. Check out photos from Majical Cloudz recent set at Glasslands here.

In between those two, Yamantaka // Sonic Titan played over at La Sala Rossa and, having seen them twice last month during CMJ, I will admit to being checked out a little. But I do like what they do. The evening ended, officially, with a theatrical performance from Murray Lightburn who has fronted The Dears since before Montreal became a "thing." Lightburn's first solo album, MASS:LIGHT, came out earlier this year and while the songs are his typical anthemic style, musically its pretty much a synthpop album.

For the show, his only backing was two singers wearing masks and angel wings, with jingle bells on staff as occasional percussion. Lightburn, meanwhile, was all in black wearing an eyepatch with a light on it. With a carefully lit stage, he was cast in silhouette the whole time. At one point he knelt by the monitors, and someone wearing a pig mask came out and draped a cloak over him. It was at this point I thought "oh boy this is going to get good" hoping things would go full Phantom of the Paradise, but that was as kooky as the night got. If you're going to have something like that happen, personally I feel like you gotta follow-through and gleefully drive the train off the rails. That said, Lightburn does possess that supercharisma gene, and his voice remains a weapon of choice.

Though the night's "official selection" ended there, the evening did not as their was an afterparty at Casa featuring Mac DeMarco's other band Walter TV, whose set we wrote about here.

Thursday's official selection includes Born Ruffians, Odonis Odonis and Solar Year -- and I'll be spending the afternoon watching a bunch of bands I know zilcho about, which can be exciting -- so look forward to a report on that (and more of my signature blurry iPhone pics) to come.

Streams and videos from Dusted, Seoul, Black Atlas and Murray Lightburn, below...