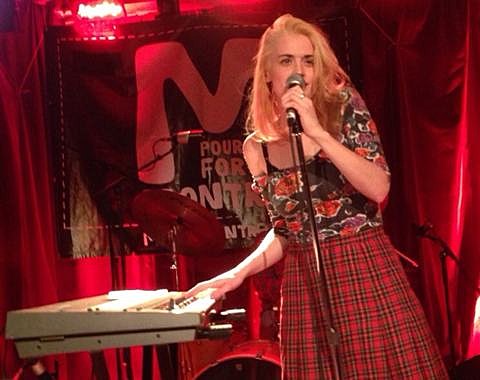 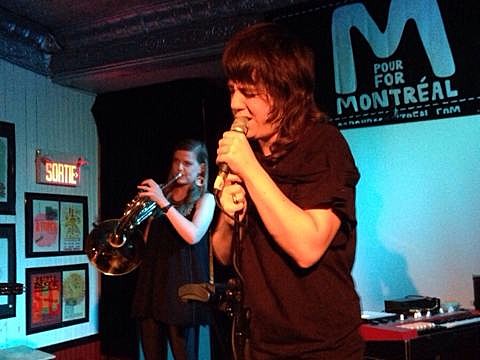 Day 2 of M for Montreal featured five bands in their evening "official selection" which was again held at Casa Del Popolo and La Sala Rossa which are across the street from each other on St. Laurent Blvd. The night started strong with Foxtrott, aka Marie-Hélène L. Delorme, whose Shields EP is full of extremely catchy, quirky dancepop. (Stream it below, it's good.) For her live performance she was backed by a French horn (though a different one than she had at CMJ) which at times seemed to take the part that a guitar might've. We got a few new songs that I thought were as good as anything on the EP. Her music, I think, would work well in a more fleshed out band line-up but she held her own well. A live video of Foxtrott at Pop Montreal is below too.

Over at Sala Rossa it was TOPS who I've seen a number of times (they were at CMJ too), including when they used to be called Silly Kissers. They've grown a lot as a band -- and are now signed to Arbutus (aka Grimes' label) -- and have quite a few solid songs, many of which have an early '80s Fleetwood Mac vibe to them. There is also a dimestore quality to them which is kind of charming, but I wondered what they might sound like with fuller arrangements.

Back at Casa, it was MTL duo Solar Year whose ethereal brand of electronic music is icy with vocals that work like an instrument more than something where lyrics are important. They played against slow-motion projections of some palatial estate -- shades of Matthew Barney's Cremaster -- and, for it being as chilled-out as it was, I thought they were great. Their new album, Waverly, came out over the summer and you can stream it at Rdio. 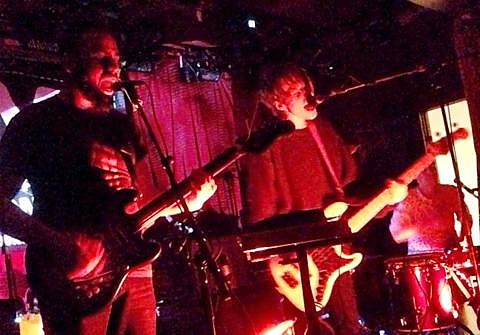 Next was Odonis Odonis at Sala Rossa, who I've also seen a few times but am very into their gothy, post-punk garage which they play at maximum volume. While it's easy to describe them as I did in the last sentence, they don't exactly sound like anybody else and get better every time I see them. Great set. 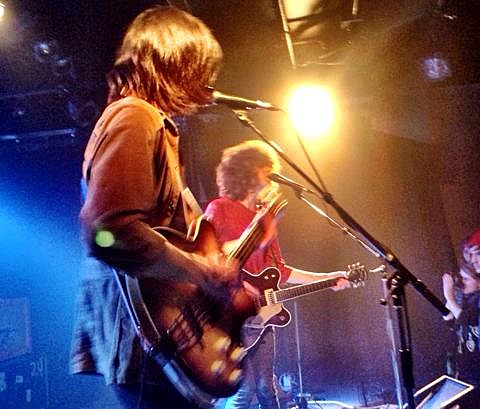 After that was Toronto's Born Ruffians but I snuck out to catch UK band Temples over at Cafe Campus where I made it in time for half their set. Armed with 12-string guitars and Mark Bolan hair, I am a sucker for this sort of Byrdsy/Kinksy/glammy type of Britpop and on singles "Shelter Song" and "Keep in the Dark" they do it very well. The band just announced their debut album, Sun Structures, will be out in February and you can stream their new single "Mesmerize" below. Their first North American tour has them in NYC next week: Bowery Ballroom on November 25. (tickets)  and Union Pool on November 26. (tickets)

My Thursday afternoon was also spent at Cafe Campus where its two stages were showcasing more commercially-minded pop -- some veering into Michael Buble territory -- the best of which was definitely Groenland whose music was on the orchestral side with strings and horns and a singer who played a ukulele and sounded more than a little like Adele.

Tonight (11/22), M for Montreal expands into M Fest with shows all over the city. That includes the BrooklynVegan co-presented show with We Are Wolves, Duchess Says and Solids at Cabaret Underworld, which is sold out.

Foxtrott - "Beyond Our Means" Live at Pop Montreal 2013