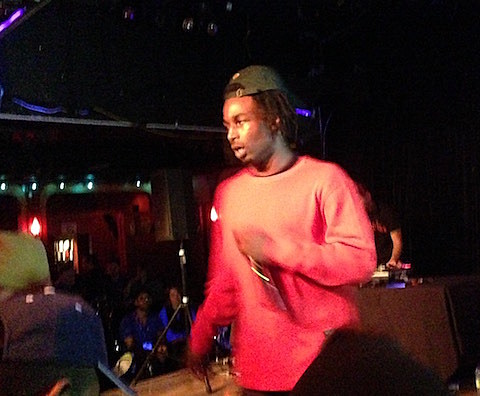 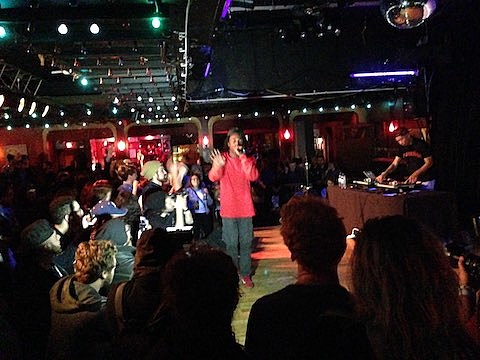 A lot of Montreal feels like it was frozen in amber in 1981, when the autumnal earth tone palette of the '70s was beginning to give way to the shiny new decade ahead. The sign for Café Cléopâtre, an "adult entertainment" venue on Saint Laurent, with oddly drawn nude caricatures, definitely feels lost in time...or forgotten. A strip club on the lower floor, the upstairs is a cabaret venue that usually hosts drag revues. As far as places like this go, this is what you want: leather banquets, red lighting, with seamy details like an ancient (but still in use) change machine by the bathrooms. A very tall man in a tux, who seemed like he'd been at Café Cléopâtre as long as everything else in there, stood silent by the coat check which was also run by someone who also seemed like a fixture of the place.

Thursday night (11/19) this was host to M for Montreal's hip hop showcase, featuring a bill of Canadian rappers and its regular clientele by mainly industry folk. This was one of the two "official selection" shows happening that night. The main attraction was Toronto's Jazz Cartier who is getting a lot of attention lately and even if you know almost nothing about current hip hop (that would be me), you have probably heard him called "the new Drake." I cannot speak to whether that is the case or not, but Cartier was definitely the best act of the night, with an undeniable charisma and confidence. He was also the only rapper to have an actual DJ, and there was a large cluster of very excited fans up front who knew every word.

Jazz Cartier's mixtape Marauding in Paradise dropped back in April, he just released new track "I Know," this week, and will be touring the West Coast before the end of the year. He also plays again at M for Montreal tonight (11/20) at the large-scale Metropolis. All dates are listed, along with streams of the mixtape and new track, below.

The actual headliners for the night were Montreal's six-strong Dead Obies who call themselves "post rap" and rhyme in "Franglais" meaning I caught the occasional shouted word. I actually think the French language lends itself very well to hip hop, and sounds good even if I don't understand what they are actually saying. They are fun, if bro-ish, and definitely have a big following in Montreal.

The other acts on the bill were Montreal's Wasiu, who released the MTLiens mixtape a few months ago, and multi-cultural Saskatchewan crew Queen City Stoopkids who were a little green had endless enthusiasm.

The other M for Montreal official selection was at Club Soda, which is directly across the street from Café Cléopâtre, and hosted three Montreal indie bands: Foreign Diplomats (dancepunk, which seems to be eternally popular in MTL, here with a trombonist); established folk-pop act Plants & Animals (accomplished if overly smooth for my taste); and Francophone artist Louis Jean-Cormier.

For the weekend, M for Montreal becomes more of a traditional multi-venue festival with shows all over the city, including The Dears, Montreal vets We Are Wolves, Moon King, Hudson Mohawke, Night Beats, Foxxtrott and more.

You can read about M for Montreal day 1 here and stay tuned for more coverage.