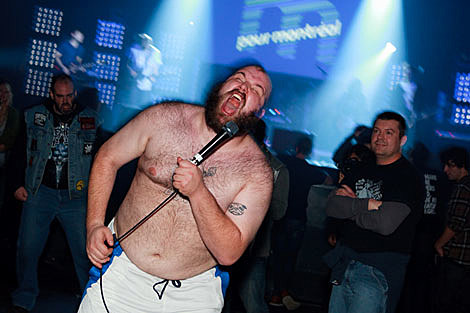 If you're just joining us, you might want to start with Wednesday night, Thursday night, Friday night, and then Saturday day.

The final event in the three-day M for Montreal festival/conference was Saturday night's M for Metropolis (11/21), showcasing artists who are genuinely huge in their home city. It took place in the Metropolis Theater and unlike the other more showcase-like nights, this one was clearly aimed at local fans who did indeed pack the 2500 capacity venue. I avoid venues this size like the plague (I have yet to step foot into NYC's Terminal 5) and happily took my seat with the other "international delegates" in the balcony where there were great sight lines to the action, but from that distance you don't exactly get into the show. (Though I think I was more into it than the nearby row of Canadian journalists who all had their laptops set up at the show presumably to take notes - I saw more than a couple checking Facebook.) Add to that the more mainstream nature of some acts (minus a certain Polaris-winning, profanely-named headliner), the Metropolis show was a bit of an anticlimax for me.

Montreal feels like they've got their own French-Canadian equivalents to every popular English language band (or at least genre). For example, show opener Xavier Caféïne filled the "Francophone Foo Fighters/Green Day" slot and Misstress Barbara was the pop/dance act of the night -- though I can't imagine her American equivalent covering a Leonard Cohen song like she did.

Melissa Auf der Maur was up next. In America, she's mainly known as the bassist for Hole (and then Darcy's replacement in Smashing Pumpkins) but in her hometown of Montreal she is rock royalty and a successful solo artist. The crowd was going crazy for her as she worked the stage and pulled out all the classic Rock Moves. She played songs from her 2004 solo debut and a bunch of from its follow-up, due sometime next year.

Things got more interesting -- for me -- from there. I like Malajube who I've seen a lot - a bunch of times around when they toured for their first album, but probably not since 2007. Always in small venues. So I don't know whether it was the size of the stage and the light show, or whether the band has really stepped it up, but Malajube sounded positively epic at Metropolis. I'm not so familiar with their new album, but they are definitely working with a bigger sonic palate these days. And they can definitely pull off playing venues this size (at least with crowds like this). It was a nice jolt to my system, which was a bit bogged down from a heavy meal right before the show.

The coolest thing of the night had to have been Champion and his G-Strings. Nothing livens up a DJ set like having him conduct five guitarists during his set, kind of like a techno Glenn Branca. (OK, it's nothing like that.) Champion has been a Montreal superstar for a while and the crowd was going absolutely mental the whole set. Even with the whole guitars angle, it's still weird to see crowd surfing for a dance act. I'm not sure Champion will achieve this kind of success in America, but I could see him winning over a late night Coachella crowd.

Champion finished his set... and half the crowd split before headliners Fucked Up took the stage. They were definitely the odd band out on this bill, and not just because they were from Toronto. "We're gonna ruin the party!" declared Pink Eyes right before he jumped down onto the floor where he spent the rest of show prowling the crowd, wrapping himself in his mic cord, bonding with moshers and scaring the unprepared stragglers who hadn't left already. Not your normal show for Fucked Up, but awesome in its own way. 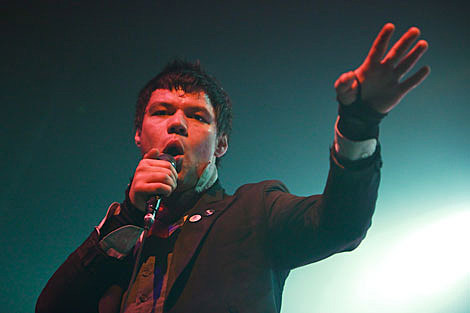 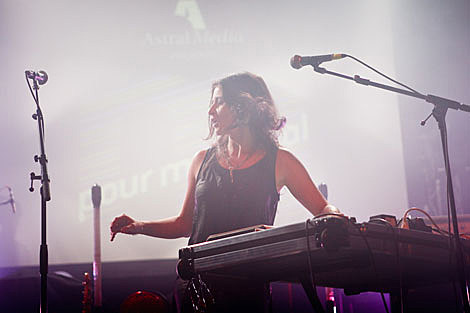 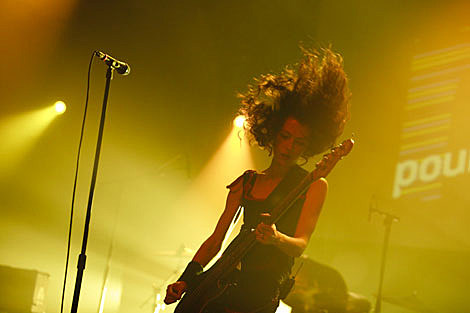 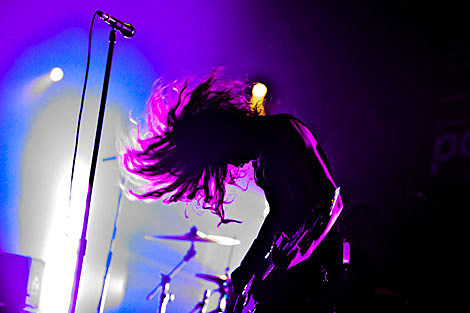 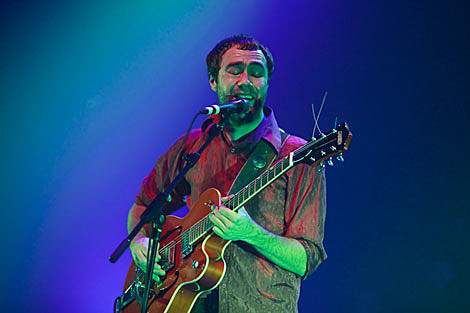 Champion and his G-Strings 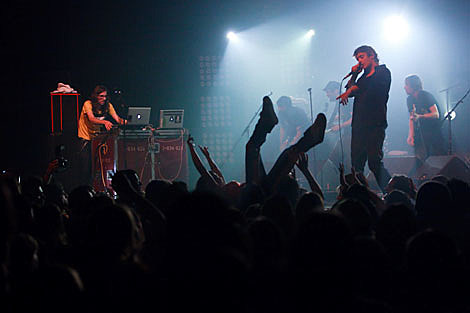 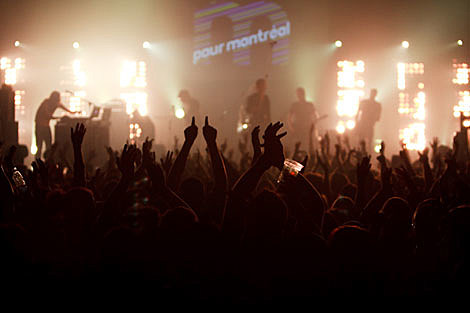 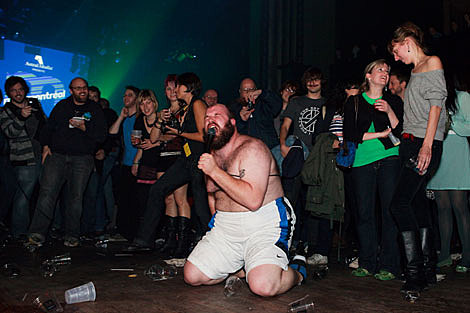