M83 at Music Hall of Williamsburg (more by Dominick Mastrangelo) 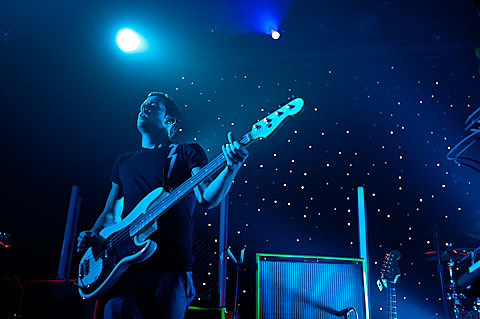 "Unfortunately due to circumstances beyond our control M83 will now not be able to play the shows that were recently announced in Albuquerque, Phoenix and Las Vegas. We are very sorry about this and hope to be able to visit these cities later in the year."

That recent cancellation definitely sucks for M83 fans in the Southwest, and the band added insult to injury today by announcing ANOTHER NYC date on October 2nd at Hammerstein Ballroom. Tickets are on fan presale now and will hit Ticketmaster on Wed, 4/18. The show is in addition to the band's already-sold-out appearances at Terminal 5 in May AND Summerstage in August. Sick burn broze.

In other M83 news, the band posted and quickly removed a post on their Facebook wall that was targeted only at French users and stated their outrage at extreme-right political party Le Front National using the band's hit "Midnight City" in a campaign video according to Pitchfork

To my horror, I discovered that the Front National have been using "Midnight City" in one of their campaign videos. They are doing this without my permission, and I am appalled at their lack of artistic respect. At the very least, artists should be asked if they agree, or disagree, with being associated with a certain image or brand. Even the most commerce-minded advertising agencies and brands do so.
In general, the music of M83 is apolitical, and I refuse to be associated with any party, and particularly the Front National...

Show your outrage or solidarity with M83 at one of the shows listed below, which include Coachella (this weekend and next), Lollapalooza, and a gang of festivals in the EU...