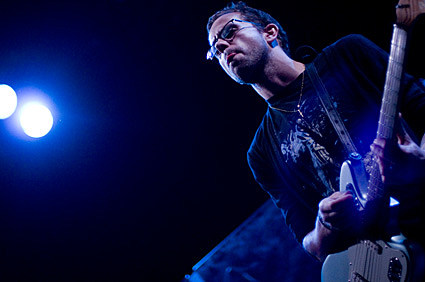 Following a sold-out US tour in May and June and his recent performance at the two-date Download Festival in Southern California, M83 (aka Anthony Gonzalez) will be back to tour North America this November. Brooklyn's School of Seven Bells are set to open. The tour is in support of M83's fifth album "Saturdays = Youth" released April 2008 on Mute...

...The M83 live setup for this tour includes Gonzalez on vocals, guitars and keyboards, Loic Maurin on Drums, Pierre-Marie Maulini on bass and guitar and featured album vocalist Morgan Kibby (of LA-based band The Romanovs) on vocals and keyboards.

The NYC show is Webster Hall on November 14th. Tickets are on sale at noon. All dates below...