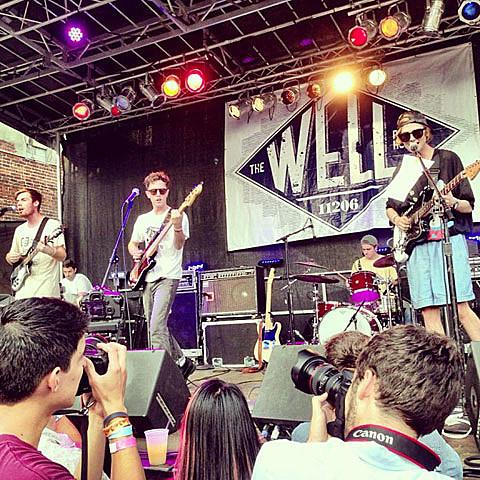 Still underway as I type this, the two-day Captured Tracks Festival happening this Labor Day Weekend at The Well in Bushwick featured a very special set on Sunday by a label supergroup dubbed Shitfather, featuring Cole Smith (Diiv), Dustin Payseur (Beach Fossils), Jack Tatum (Wild Nothing) and Mac DeMarco. That's them pictured above.

They did two songs by Cleaners from Venus ("Only a Shadow" and "Victoria Grey") whose records have been reissued on CT, brought out a couple of the Craft Spells guys for two of their songs, covered The Wake's "Pale Spectre" (with Cole dressed in drag as Charli from Blouse) and then did two Blank Dogs songs ("Setting Fire to Your House," "Tin Birds").

More about the whole fest later, but you can check out video of "Pale Spectre" and "Tin Birds" from Sunday, plus one of Mac DeMarco playing "Rock and Roll Nightclub" on Saturday at the Well (the first day of the fest), below...