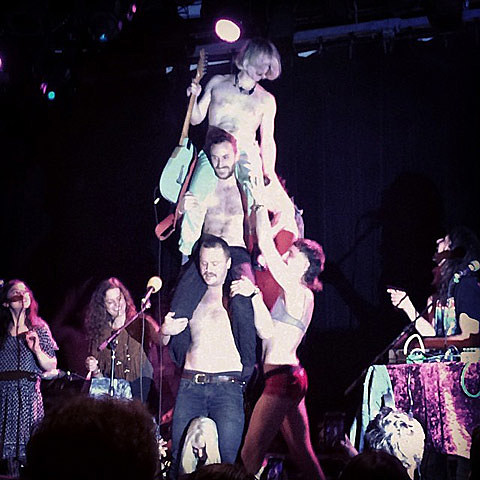 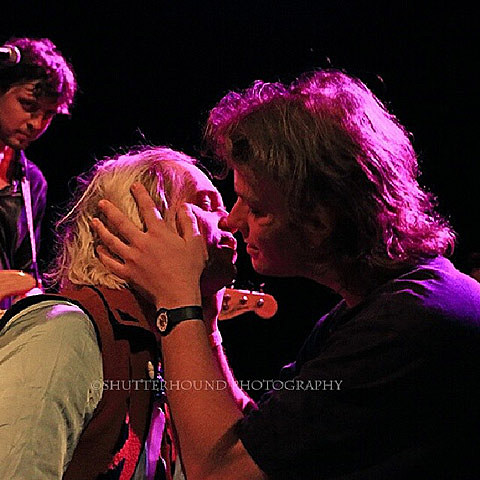 Friday night, the two rolled over to Music Hall of Williamsburg to keep the party going. The place was even more packed than Bowery Ballroom. This time, Mockasin began the performance playing his guitar while crowd surfing towards the stage. Once there, the band osmosisly soaked up Mockasin's vibe and started going koo-koo too, ditching various shirts and pants, with many in the crowd soon following suit. And mind you, this was already in the first 15 minutes of the show! Mac DeMarco got up and joined Liam Finn on bongos, Kirin J Callinan and his brother Tex got up there again, Jorge Elbrecht (from of Violens/Lansing-Dreiden), plus more ladies pulled up from the crowd. And it went like that for awhile longer, and seemingly into the backstage area, and no doubt into the great beyond that Connan Mockasin's mind dances around in. - [CMJ]

After playing Bowery Ballroom on Thursday, Connan Mockasin and Kirin J Callinan took their party/tour across the East River to Music Hall of Williamsburg on Friday (5/4). No Dev Hynes that night (he was singing at the William Onyeabor tribute) but Mac DeMarco showed up. The result: most of the band taking most of their clothes off and, at one point, building a teetering shirtless man tower as seen in the instagram above. Liam Finn and his brother Elroy were there again, and Violens frontman Jorge Elbrecht joined too, and it was another evening of kind-spirited debauchery. Did you go to MHOW or Bowery? Both?