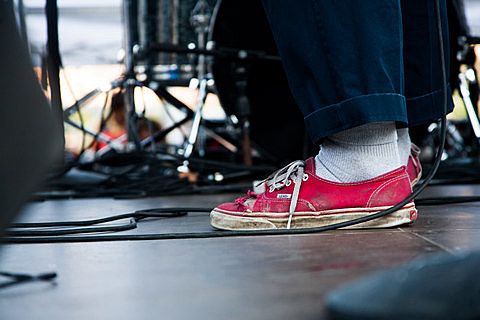 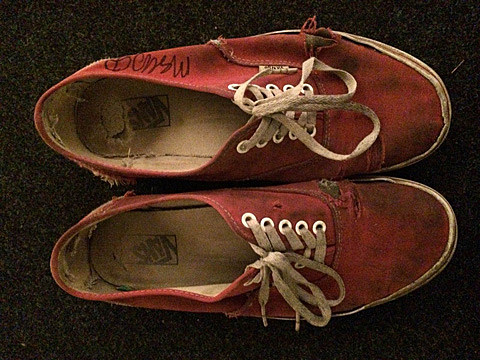 Would you like to own Mac DeMarco's old Vans? He's selling them on Ebay for charity:

I'm selling an old pair of my shoes. I've John Hancocked the left shoe. Will anyone buy an old stinky pair of shoes? I don't know. lets wait and see. I'll probably throw some other crap in the box before shipping it, I dunno what.

If you're one of those kids who tried to take them off my feet while I was crowd surfing at some point this year, nice try jackass. But hey, here's another opportunity for you to have them.

All of the profit will go to Willie Mae Rock Camp for Girls.

Bids on Mac DeMarco's old Vans are already up to $7,900.00 as of this posting with six days left in the auction. As he wrote above, all proceeds are going to the Willie Mae Rock Camp for Girls. Ebay also has an option where you can ask the seller questions, which people have been doing, and Mac's been answering. Some highlights:

Q: Ever stepped on dog shit in these? Can I even say dog shit on here? If so, thats awesome of eBay. Hope its not censored and you do know what I'm saying :)
A: I'm usually pretty good with not stepping in dog shit, but I can't be 100% positive

Q: Ever kick a hippie with these bad boys on?
A: Don't really kick hippies that much. definitely kicked it with some hippies in these

Q: yo mac daddy have you had any religious/spiritual experiences while in these shoes? peace and jah bless
A: Yes. We came into contact with a reptilian shape shifter at pukklepop. A drummer. No joke, evil is real.

If you're wondering how they smell, there's a video that Mac shot with his girfriend, Kiki, and you can watch that below.

Mac played Terminal 5 earlier this month and will spend the early part of 2015 on the other side of the world, playing Japan and then the Laneway Festival in Australia, New Zealand and Singapore. His only North American dates currently are during Austin Psych Fest's Levitation in May. All dates are listed below.