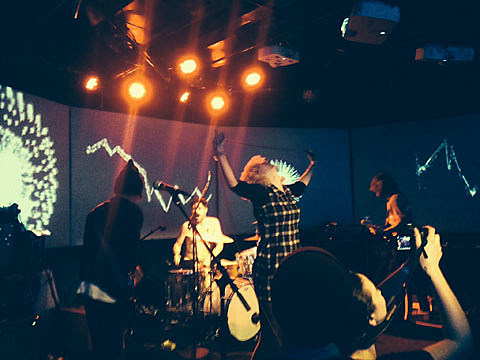 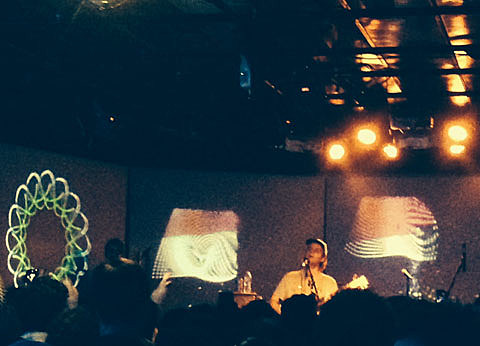 One of the funniest things about seeing a show at Brooklyn Night Bazaar is that most of the attendees have absolutely no idea what time anything is happening. We hit the entrance about 8:15 and fell into line behind one group who was convinced Hunters started at 10 (they started at 8:45) and another who was sure they had already missed Mac DeMarco's set (he went on at 11:45). To be fair, the Night Bazaar's website doesn't provide a whole ton of information about set times, but checking Twitter can be quite revelatory.

Hunters kicked off the night, sounding as tight as ever. They raced through a no-nonsense onslaught of punk-tempo songs with very few pauses in between. I was listening to their full-length after the show and was surprised by how much faster all the songs were performed live. Vocalists Isabel Almeida and Derek Watson bring a ton of energy to the stage, and impressively maintained their sound as they danced in circles, slid down speakers, and egged on the rather impressively-sized mosh pit that formed in front of the stage.

There was a noticeably long break before Delicate Steve, and as the band began, the show area started to get uncomfortably crowded, with a good portion of the attentive audience pushed back into the picnic tables and vendors. Both Mac and Steve had to ask the entire crowd to move back at various points, as the first few rows of fans were crammed somewhat dangerously against the stage barrier.

Steve's set was still very enjoyable, and his unique brand of slide-guitar anthems kept the energy high and offered a refreshing contrast to the moodier textures of Hunters. If Hunters' set was about shaking off the week, Steve's was about starting the weekend, and there was plenty of dancing and crowd surfing to salute the music's celebratory vibe.

Mac took the stage shortly after Steve, armed with an electric guitar and a can of Coors. I had no musical expectations for the set, imagining a Mac DeMarco solo set to be more about Mac as person than Mac as musician. This is the man, after all, who released this single only one day prior. However, the show turned out to be quite musically fulfilling. Mac's voice sounded excellent, and the songs sounded unexpectedly rich in the solo setting. Mac treated the audience to debut solo performances of "Ode To Viceroy" and "My Kind Of Woman" by request, and he also showed off quite a bit of new material, teasing Captured Tracks owner Mike Sniper about not being able to tell the audience when the new record is being released.

Of course, his personality was also on full display. The man was as charming as ever, laughing to himself in the middle of songs, singing his own guitar solos, inviting all of Delicate Steve to help him cover Jonathan Richman's "I'm Just Beginning To Live," and ending the show by crowd-surfing his way off stage. As is to be expected from any solo show by a typically full-band-bearing artist, not everyone in the audience was equally engaged, and around 30% of the crowd left by the fourth song (which actually freed up some much needed room on the floor).

Mac eventually ditched the guitar and began performing karaoke style, which provided the audience a much more informed understanding of how the new record will actually sound. For starters, one of the songs is really synthy: "Steely Dan," "Washed Out," "chillwave," and "was that serious?" were tossed around immediately after it was performed. On the whole, however, the record's basic songwriting style stays very much the same as 2, featuring Mac's laid-back delivery and plenty of grower hooks that are likely to only get better with time. Oh, and every song is still about cigarettes or his girlfriend. Not that we mind.

You can watch videos of Mac playing three of those new songs at the Night Bazaar show, and listen to him perform some others on a CKUA radio show (during which he confirmed the new album's title, Salad Days) below as well. Also below is the "album teaser" which may be a less helpful hint of what the album will sound like than these other videos...