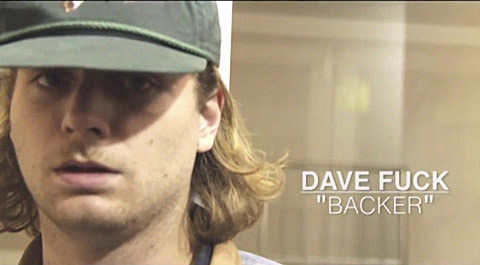 Mac DeMarco didn't play any shows during CMJ but was around the whole week, whether it was DJing at Baby's All Right for Captured Tracks' day party, or as guest selector at Jonathan Toubin's Soul Clap & Dance Off at Brooklyn Bowl on Saturday (10/25). He was also generally out and about -- though there are a lot of guys Brooklyn who've copped Mac's style lately. Maybe they were just lookalikes.

The real Mac DeMarco stars in a new short film by Cole Kush titled BACKER. In the faux documentary, he plays Dave Fuck, a professional "backer," who helps people park their cars. The pitched-down voice over has things on a surreal vibe to start and then a dream sequence takes it into Adult Swim territory. Watch it below.

Meawhile, DeMarco will play his biggest NYC show yet next week (11/4) at Terminal 5 with mischief-maker Connan Mockasin, and CMJ overachievers King Gizzard & The Lizard Wizard. That should be a fun, crazy show. Tickets are still available and if you'd like to go for free, we're giving away a pair of tickets to the show. Details on that, along with the BACKER film, below...

======================
For a chance at winning a pair of tickets to see MAC DEMARCO AT TERMINAL 5: either tweet something that includes both @BrooklynVegan AND "MAC DEMARCO" in the tweet, or send an email to BVCONTESTS@HOTMAIL.COM with the subject line "MAC DEMARCO". Include your first and last name in the email. We'll pick a winner at random and contact them with more details. If you enter by email, it will not be shared with anyone else. Good luck!
======================