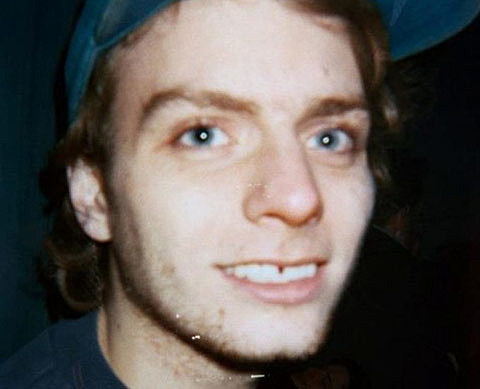 It begins. Bands from all over the world -- England! Canada! Sweden! New Zealand! Virginia! -- descend on New York as they beat a path to Austin for this year's SXSW. Which is good for those who aren't going, as well as folks who are but want to see bands play longer than 25 minutes and aren't strung out on a four-day diet of free breakfast tacos, Vitamin Water and Amstel Light. There's lots more going on than what is covered below, but it's what I'm interested in over the next few days.

New Captured Tracks signee Mac DeMarco is in town from Vancouver to play a couple shows. He plays an all-C/T bill tonight (3/2) at Music Hall of Williamsburg with DIVE, Hoop Dreams and headliners Beach Fossils (sold out), and then Glasslands tomorrow (3/3) with  headliners Widowspeak and  Quilt.

Demarco, who used to record under the name Makeout Videotapes, has a smoky baritone that is part Chris Isaak and part Tindersticks. His music owes a little to Isaak as well, with an early '60s vibe (Ricky Nelson, Gene Vincent) by way of '80s neon, all on a four-track budget. You can check debut "Baby's Wearin Blue Jeans" from his debut, Rock n' Roll Hotel (out 3/20) at the top of this post, which is indicative of what Demarco is all about. You can also watch the video for "Only You" which is kind of NSFW. Dude's a provocateur. 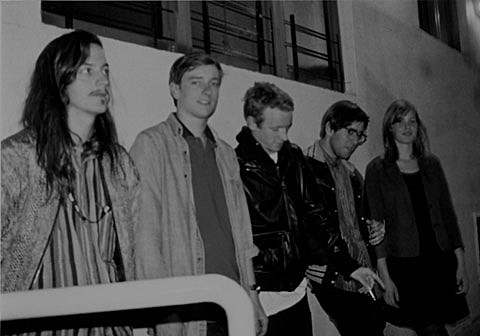 Tonight's MHoW show is the first NYC show we've had from Blacksburg, VA's Hoop Dreams in a long while. They were good when I saw them at Glasslands last year and have the potential to be breakouts for the label if they ever get around to releasing another record (only a single so far). Live, they're more in the Arcade Fire/Editors anthemic style than the single might suggest. It will also be a good opportunity to hear new music from Beach Fossils who are busy at work on their second LP.

And of course, DIVE, who are probably one of the more exciting live bands in Brooklyn right now and are a definite SXSW must-see if you don't live here and have the opportunity to catch them twice a week like we currently do. (They're also touring with Frankie Rose in April.) The show is sold out tonight, but I'd be shocked if there weren't tickets at the door at least when the box office opens. 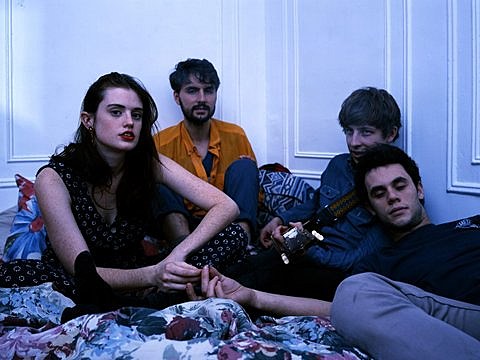 Montreal band TOPS are playing 285 Kent tomorrow night as part of a killer bill that includes Blood Orange, Phone Tag and  Caged Animals. The four-piece is comprised of most (if not all) of MTL's Silly Kissers who played here a few times over the last few years and were a little on the precious side (they sometimes wore mime makeup). TOPS, however, are more in the Ariel Pink/Puro Instict brand of minimal keyboard pop. Their debut, Tender Opposites, came out this week on Artibus Records, which is also home to Grimes (in Canada). You can download "Turn Your Love Around" at the top of this post and stream the whole thing (and watch the further down.

As you may have read, 285 headliners Caged Animals will open the Official BrooklynVegan SXSW showcase on March 14 at Bar 69 which also includes Titus Andronicus, Screaming Females, 2:54, The Young and one more TBA. If you haven't heard their tuneful, charming debut Eat Their Own yet, it's still streamable at their BandCamp. And they're terrific live.

So is Blood Orange, despite it just being Dev Hynes, his guitar and a laptop. I saw him last weekend at Glasslands where he spent as much time in the crowd as he did on stage. I do wish he'd get a band, but the one-man Blood Orange is a lot of fun. I haven't seen Phone Tag in a while, but I dig their brand of '80s synthpop. 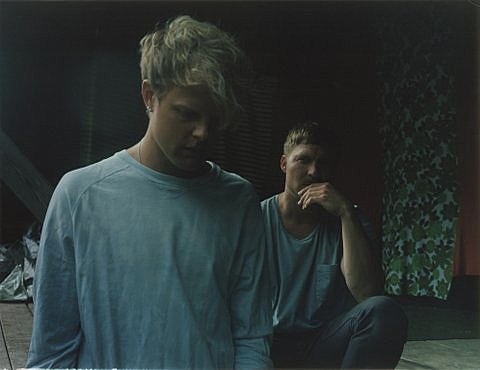 Sunday night (3/4) at Bowery Ballroom is the NYC debut of Swedish duo Korallreven, one half of which is The Radio Dept.'s Daniel Tjäder. I like their debut album a lot, all lush, synth-driven dream pop but, like a lot of music like this, I wonder how they're going to make it an interesting concert experience. I envision two guys behind laptops and keyboards bobbing their heads and singing, with some projections and hopefully smoke machines.  Maybe they could move the downstairs couches to the main room? Maybe I'm wrong. We'll see. I'm sure it will sound great in any case.  If you haven't heard them yet, you can download "Sa Sa Samoa" in regular and remixed form at the top of this post and watch the video at the bottom of this post. Also playing: Lemonade and Young Magic. 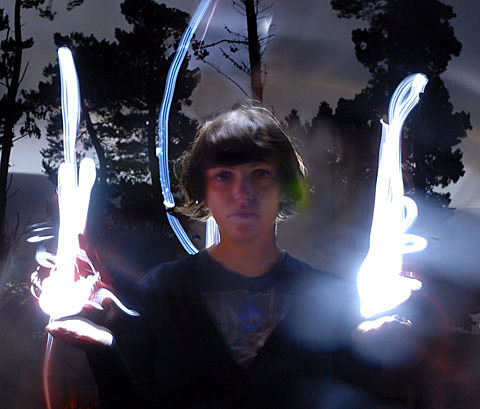 Also playing Sunday night, at Cameo, is Bachelorette -- aka New Zealander Annabel Alpers who I think lives here now. Buoyed by Alpers delicate, breathy voice, Bachelorette make ethereal synthpop not miles away from The Magnetic Fields, with whom she's going on tour for seven shows. (All dates at the bottom of this post.) I liked it better when she had a band, but the loop pedal incarnation is pretty lovely too. You can check out a couple videos below or stream her most recent album on Spotify.

Young Prisms at the Comet, Seattle (photo by Finest Kiss) 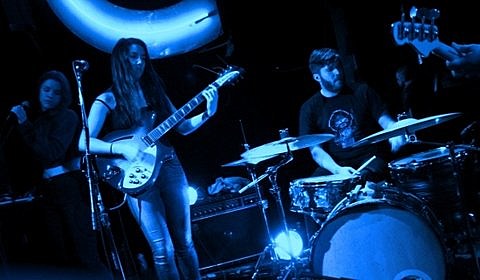 And looking into early next week, San Francisco's Young Prisms and Austin's Boy Friend are at Glasslands on Monday (3/5). Young Prisms new album, In Between, is out March 27 on Kanine and is a real step forward for the band. Their still mining first-wave shoegaze, but the songs are much stronger this time out with a couple that go for jangly Velocity Girl style pop. They will be very loud I guarantee you. Boy Friend will make a nice opener, with their hazy, 4-AD miasma vibe. You can download MP3s from both bands at the top of this post. Also playing, seemingly from another show, are Alex Bleeker & the Freaks and Tanks Amigo.

That's the big stuff for the next four days. But wait, there's more. Day-by-day picks of things not covered above:

The Young Empires at M for Montreal 2011 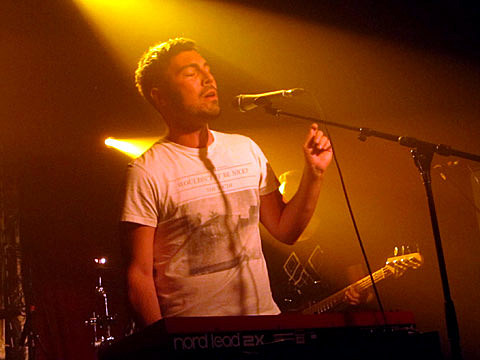 Like Friendly Fires and Foals? Check out Toronto's Young Empires are at Glasslands, with Saint Motel, Fan-Tan, and Transmission NYC (DJ set).

Expect a wild evening at Death by Audio with "original line-up" Tyvek, plus Habibi, Feelings and the Numerators. Stick-in-the-muds, go see something else! 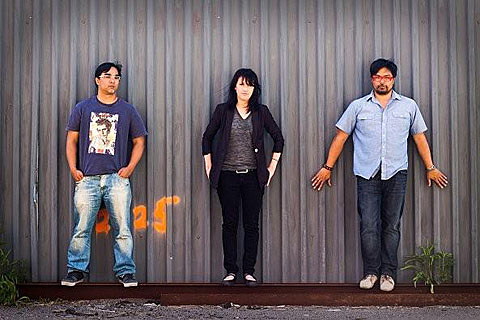 Holy crap! Versus are playing Cake Shop. If you need more, there's Wussy, Diehard, and Choo Choo La Rouge too.

Like things dark, grimy and loud? Check out Pop. 1280, Velvet Condom (what a wonderfully horrible name), and  Bootblacks at St. Vitus. 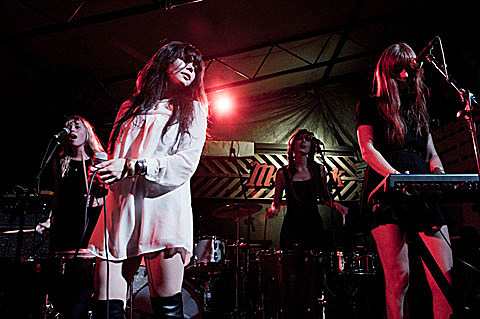 It's a swell show at Knitting Factory, with Royal Baths, Slowdance, Habibi, and Mike Visser.

Or you could go to Mercury Lounge. Early it's rockabilly legened Dex Romweber; late it's an Austin double-shot with onetime Voxtrot singer Ramesh and all-girl, all-goth Feathers.

And that should do you. Tour dates, flyers, videos and audio streams are below. Go see some live music!

Mac Demarco -- 'Only You' from Evan Prosofsky on Vimeo.