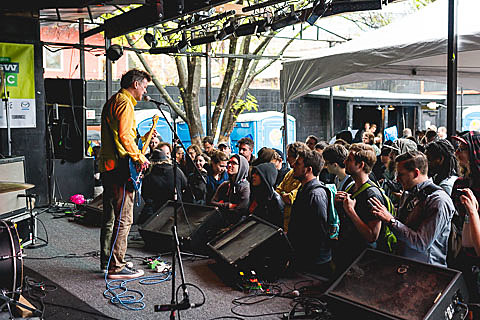 Staring At Your Hologram is an album-length instrumental deconstruction / revision & remix of my Non-Believers record which came out in May 2015. The songs are sometimes still recognizable in their new shapes but have been sewn together into one long track.

For the most part I took away the drums and the vocals, rearranged some parts and brought instruments to the fore that in the original album were more of a bed for the guitars and vocals. Tape echo and reverb have been judiciously applied. If the most obvious influences on Non-Believers are bands like New Order or the Cocteau Twins, then for this version of the album i was drawing on a different part of the 80s landscape and trying to imagine what it would sound like if Arthur Russell or Cluster made an album by remixing the basic tracks. Unlike a record with singing and words and super-linear songs this is meant more as something you can put on and either pay attention to, or not.

Mac has a few solo dates coming up, but first Superchunk play two NYC shows (both sold out). The first is the stacked Ground Control 15th anniversary show at Webster Hall on 12/2 (with Titus Andronicus, Rainer Maria, Kurt Vile, Parquet Courts and many more) and the second is an intimate headlining show on 12/3 at Baby's All Right. Since we last spoke, All Dogs were added to that show which is a good fit for Superchunk. If you have tickets, it's worth showing up for them.

Meanwhile, All Dogs are on tour now with Frankie Cosmos, and that tour hits NYC this weekend at The Marlin Room at Webster Hall on Sunday (11/22). That show also has Epoch bands Eskimeaux and Florist, and tickets are still available. Updated dates are listed below.

All Dogs singer Maryn Jones is also a member of Saintseneca, who just announced a tour with Thao & the Get Down Stay Down and Little Scream.