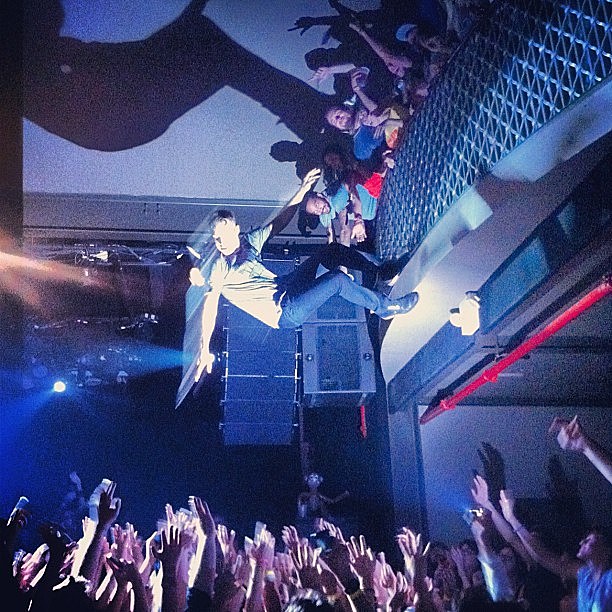 The Mad Decent Block Party returned to NYC this past Sunday (8/5), happening for the first time in the newly-christened Williamsburg Park instead of South Street Seaport, where it's been in previous years. Unfortunately, due to the storm that hit NYC on Sunday which picked up during Erol Alkan's set, the party was shut down early before headliners Major Lazer (the project of Mad Decent label boss Diplo). Before the party did get shut down, we got sets by Mr. Muthafuckin' eXquire, Bonde Do Role, Lunice, Riff Raff, Baauer, and more. You can check out some videos of the performances and the rain below.

After MDBP's cancellation, Diplo tweeted that Major Lazer would do an extra long set at the afterparty at Music Hall of Williamsburg, which also had sets by Erol Alkan, Lunice, and Jim-E-Stack. The party got pretty crazy, as you can see in the picture above of Diplo jumping off MHOW's balcony, but it didn't appease everyone. One angry MDBP attendee took to his blog to say, "Diplo (Major Lazer) invited the attendees from the free all ages event to a $10/21+ after show......Thanks a ton MAD DECENT." Granted, MHOW is also significantly smaller than Williamsburg Park and the party was announced way before the weather shut down the block party so it would've been hard to get in regardless, but he has a point that it doesn't totally "make up" for the cancellation. Major Lazer will be back in NYC for a much larger (paid) show on October 27 at Terminal 5 too (tickets).