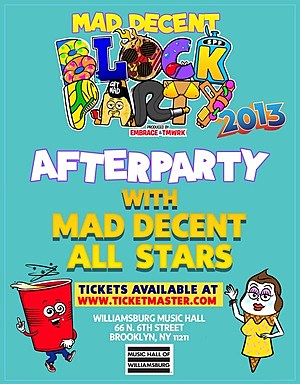 Speaking of block parties, as discussed, the Mad Decent Block Parties are stopping in Brooklyn for a sold-out show on August 10 at Williamsburg Park with Major Lazer, Dillon Francis, Flosstradamus, Matt & Kim, Rockie Fresh, and more. Its also just been announced that at night, the "Mad Decent All-Stars" will head to Music Hall of Williamsburg for an afterparty. Tickets for the afterparty go on sale Tuesday (7/30) at noon.

Meanwhile, Dillon Francis recently released a new song with Totally Enormous Extinct Dinosaurs, which you can listen to below...