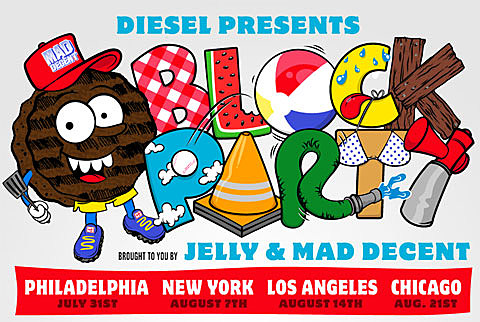 The NYC show will take place at South Street Seaport. More details below...

"Our third year running, we now have an amazing opportunity to venture outside of Philly and make these the craziest block parties yet!" -Diplo

Mad Decent and Diesel partner for the first time since Diplo served as judge on the 2004 Diesel U Music initiative. Mad Decent brings the talent heat and Diesel adds their own brand of playfulness to the events including Friday instore pre-parties with complimentary beverages, Diesel dunk tanks at each location, and the invention of the Diesel Dollar ie "money" that can buy you anything onsite from block party VIP access to Mad Decent merch to custom air horns-dollars available to anyone who swings by the store during the Friday pre-party!

Check our maddecentblockparty.com for daily updates and be sure to be on the lookout for the first location's lineup, coming your way this Monday!