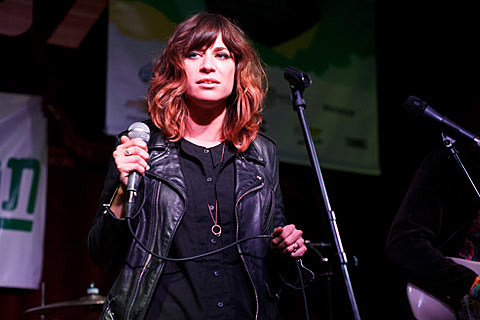 Madison Square Park's "Oval Lawn Series" is back with another summer season's worth of free shows every Wednesday from June 18 - August 6. The series kicks off with Nicole Atkins on 6/18 and here's the whole 2014 line-up:

Nicole Atkins will open for Nick Cave & the Bad Seeds at Prospect Park and Hammerstein Ballroom in July. Tickets are still available for both shows.

The "Oval Lawn Series" are not the only concerts in Madison Square Park this summer. There's also the "Mad. Sq. Kids Series" featuring family-friendly shows that take place rain or shine in the Park on Tuesday and Thursday mornings at 10:30 AM. Full schedule for those, along with more details about the "Oval Lawn Series" below...

June 18 - Nicole Atkins (7pm)
Nicole Atkins kicks off the 2014 Mad. Sq. Music: Oval Lawn Series. Atkins, a New Jersey native, was recognized shortly after her debut by Rolling Stone as one of the top ten artists to watch in 2006. Known for her "smoky vocals and dishy delivery," Atkins has been the recipient of three Asbury Music Awards in 2002 for "Top Female Vocalist", "Best Solo Act", and "Song of the Year", as well as an ASCAP award in 2005. The New York Times aptly states, "Critics began to fall for her darkly laced, almost surrealistic songs and her soaring, dramatically powerful voice," making her a force to be reckoned with in the blues, rock, and pop scene. Atkins' newest album Slow Phaser was recently released in January of 2014 and has received critical acclaim from The Daily News, The Boston Globe, American Songwriter, Paste Magazine and many others.

June 25 Ester Rada / Maya Azucena (6pm)
Ester Rada pulls from her Ethiopian-Israeli roots to mix music genres in a way that is described by critics as "gracefully combining Ethio-Jazz, Urban-funk, Neo-Soul and R&B." With musical influences such as Nina Simone, Ella Fitzgerald and Aretha Franklin, Rada has a unique take on soul that has already earned her recognition globally. Since the release of her EP Life Happens, Rada's popularity has boomed and she has successfully toured the US, Canada, and Europe, as well as showcased at the highly respected Glastonbury Festival. Rada has also been nominated for the MTV EMA awards "Best Israeli Act", cementing her rise into the international soul music world.

Maya Azucena is not only a celebrated singer-songwriter but a humanitarian, cultural ambassador, and activist who often lends her talents to causes such as natural disaster relief funds, breast cancer walks and domestic abuse awareness. The Village Voice says, "Armed with a powerfully compelling voice, Azucena just could be the most impressive of the current hip-hop/soul/r&b diva crop." She has collaborated with many artists, including Stephen Marley on his Grammy-winning CD, Mind Control, which in turn earned her a Grammy certificate. She is also the recipient of the 2011 Hearing Our Voices Award that states, "Thank you for using your voice to make the world a better place."

July 2 - The SteelDrivers / Cricket Tell the Weather (6PM)
The SteelDrivers are a bluegrass group that is anything but conventional. They smartly mix contemporary influences with traditional bluegrass sounds to create something new and wholly unique. Described as "new music with an old feeling", the band has been invited to perform on numerous radio and TV shows like NPR's Mountain Stage and the Conan O'Brien Show. Richard Bailey (Banjo), Mike Fleming (Bass/Vocals), Gary Nichols (Guitar/Vocals), Tammy Rogers (Fiddle/Vocals), and Brent Truitt (Mandolin) have been nominated for a plethora of awards since the release of their first two CDs, The SteelDrivers (2008) and Reckless (2010), including three Grammys, four IBMA awards and the Americana Music Association's New Artist of the Year award. Rounder Records recently released their third album, Hammer Down, in 2013.

Cricket Tell the Weather, winners of the 2013 MASS MoCA FreshGrass Award for emerging bluegrass talent, is made up of Andrea Asprelli (fiddle), Jason Borisoff (guitar), Doug Goldstein (banjo), Jeff Picker (bass), and sometimes joined by Dan Tressler (mandolin) and Hans Bilger (bass). They weave rock, chamber ensemble elements, and pop into their progressive bluegrass songs, forming a new and exciting sound that music lovers from all walks of life will enjoy. Songwriters Andrea Asprelli and Jason Borisoff received a blue ribbon at the 2011 Podunk Bluegrass Festival Songwriting Competition for their co-written song "Remington". The band is also committed to molding future bluegrass musicians by holding "American Roots Revival" workshops for students of all ages.

July 9 - John Fullbright (7pm)
Two years ago, John Fullbright released his debut studio album, From the Ground, to a swarm of critical acclaim, including a Grammy nomination for Best Americana Album. Known for his riveting live performances and exquisite songwriting, this native Oklahoman is planted firmly in the Americana and folk genres. His music harkens back to artists such as Woody Guthrie, Townes Van Zandt, Mickey Newbury, Jimmy Webb, and Randy Newman, but Fullbright has a distinct style that is all his own. "Another name likely to gain traction in songwriting circles is that of John Fullbright. ... A mild-mannered dude with a guitar and a harmonica rack, Fullbright draws from surprising emotional depths for well-crafted songs that prick and caress, swinging between Merle Haggard country, Leon Russell song craft and a rustic sense of the blues." (Chicago Sun-Times)

July 16 - Jacky Terrasson Quartet (7pm)
French-American jazz pianist Jacky Terrasson's relationship to the piano has been compared to "Lebron James' relationship to a 10 foot high basket. . . They could dunk in their sleep," (JazzTimes). After winning the prestigious 1993 Thelonious Monk competition, he came through the venerable jazz university of Betty Carter, and went on to collaborate with vocalists both legendary and contemporary, such as Jimmy Scott, Dee Dee Bridgewater, Dianne Reeves, and Cassandra Wilson. He is equally at home in the trio setting, where he continues Betty Carter's tradition of discerning and employing only the finest young talent on the jazz scene. His current rhythm section includes the talents of Burniss Travis (bassist) and Justin Faulkner (drummer). Jacky's music draws on the vast influences of himself and his band members, running the gamut from the swing music of the early 30s to the hard driving funk of the 70s, all with an intangible "joie de vivre" that only Terrasson can emote.

July 23 - Jon Cleary (7pm)
Jon Cleary is a seasoned funk and R&B pianist, vocalist and songwriter based in New Orleans. Born in London, Cleary fell in love with the music of Louisiana when he was only seventeen years old, evident in his songs that intertwine uniquely New Orleans-infused compositions with jazz, blues, boogie-woogie, R&B and '70s funk. The LA Times states: "... over the past three decades he's become a keeper of the city's traditions and its unique musical history, traveling the world, conveying New Orleans' elusive character in song." He has performed with music greats from across all genres such as Bonnie Raitt, Taj Mahal, B.B. King, Ryan Adams, and Eric Burdon. Cleary's impressive discography includes three solo albums and two albums with his band Jon Cleary & the Absolute Monster Gentlemen. This engagement will premiere Jon's exciting new band and give the Madison Square Park audience a sneak preview of the music from his forthcoming release entitled, Pump It Up.

July 30 - Forro in the Dark / Debo Band (6pm)
Forro in the Dark, as their name implies, is a band made of Brazilian ex-pats who play fun, upbeat, forro music in both English and their native Portuguese. Forro is described by the band as "hip-swiveling, dancefloor-filling, rural party music of Brazil's northeastern states." Mauro Refosco (zabumba drum and vocals), Guilherme Monteiro (guitar and vocals) and Jorge Continentino (pifano flute, sax and vocals) use their intrinsic talent and creativity to bring the genre of forro into the present while respecting and paying homage to its roots. As said by record label Nublu: "Give them half an ear, and your hips will take over and start rolling to their Brazilian roots rock. They're a little afro-beat, a little country western swing, a little dub, and all rock and roll, fueled by the insistent rhythm of forro."

Debo Band is a group that has cultivated the musical marriage of Ethiopian pop with American and Ethiopian funk and soul. While their take on the hybrid pop-funk genre is attention grabbing, critics have also said that it flows very organically and is "effortlessly joyful." Debo Band features eleven members in their impressive roster: Bruck Tesfaye (vocals), Danny Mekonnen (saxophones), Gabriel Birnbaum (tenor saxophone), Danilo Henriquez (trumpet and percussion), Jonah Rapino (electric violin), Kaethe Hostetter (5-string violin), Marié Abe (accordion), Brendon Wood (guitar), Arik Grier (sousaphone), PJ Goodwin (bass), and Adam Clark (drums). The New York Times said of their style, "..., a Boston group devoted to the Ethiopian funk of the late 1960s and '70s: fierce, jagged, complex and galvanizing music. With a beefy horn section, biting violins and a lead singer with a convincing Ethiopian quaver, the group brought back a live version of a style that was never recorded as vividly."

August 6 - Sister Sparrow & The Dirty Birds (7pm)
Closing out the 2014 Oval Lawn Series is Sister Sparrow & The Dirty Birds, a "...rollicking blend of soul, funk and backwoods Americana rock 'n' roll, which draws even indifferent hipsters onto the dance floor," (New York Daily News). Vocalist Arleigh Kincheloe (Sister Sparrow) is joined by The Dirty Birds, a seven man band: Jackson Kincheloe (harmonica), Bram Kincheloe (drums), Sasha Brown (guitar), Josh Myers (bass) Phil Rodriguez (trumpet), Ryan Snow (trombone), and Brian Graham (baritone sax). With Sister Sparrow's powerful voice and The Dirty Birds thunderous grooves and soaring melodies, the band gives a performance that can only be described as explosive. Since 2011, they have played countless shows across the US and Canada and made appearances at a multitude of festivals such as Bonnaroo, Firefly, Mountain Jam, Voodoo Experience, Austin City Limits, Gathering of the Vibes, and Telluride Jazz.