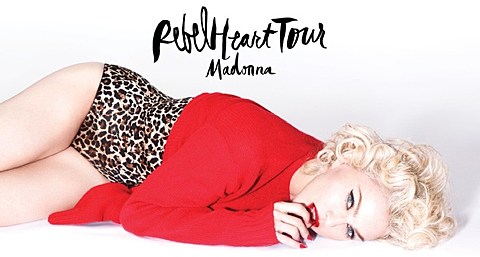 Madonna's new album Rebel Heart is out this week, and she's now announced an international tour in support of it. The tour begins in Miami this August and is set to wrap up in Glasgow in late December.

She'll hit NYC for two arena shows -- September 16 at Madison Square Garden and September 19 at Barclays Center -- and will also be nearby for an Atlantic City show on October 3 at Boardwalk Hall. Presales for all dates begin at her website on Tuesday (3/3) at 10 AM local time, which you'll need an Icon Live Pass for (unless you're a Lifetime Legacy Member). Tickets for the NYC shows go on sale Monday, March 9 at 10 AM with a Citi cardmember presale starting Wednesday (3/4) at 10 AM.

Rebel Heart features a handful of modern collaborators, including Kanye West, Chance the Rapper, Nicki Minaj, Diplo, Blood Diamonds, Sophie, Ariel Rechtshaid and more. Stream the song with Chance the Rapper, alongside the full list of tour dates, below...