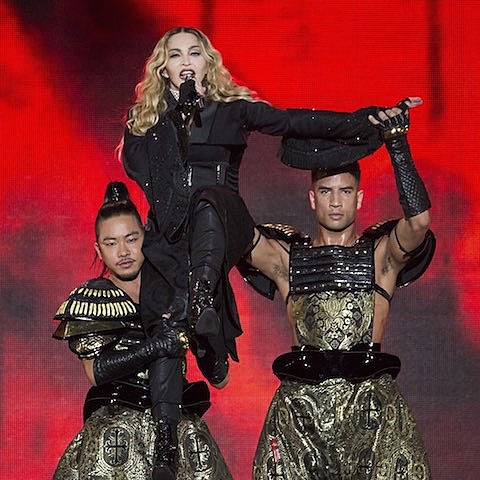 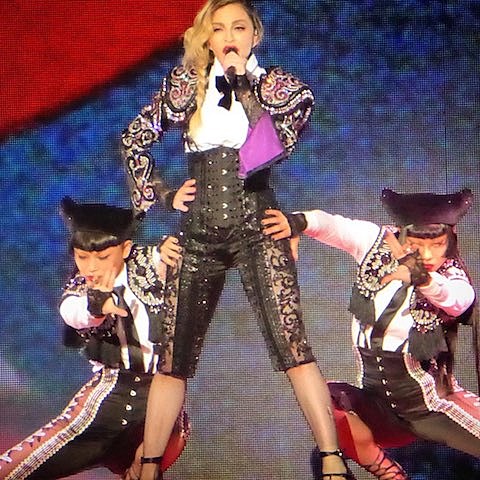 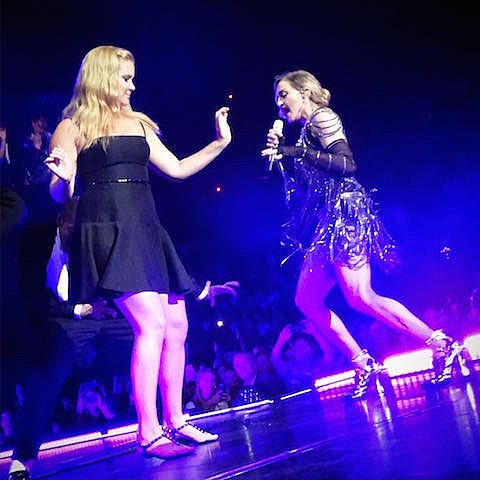 She then descends from the ceiling similarly banged up, while knights in armour march down the stage, which juts almost the length of the arena. It's Madonna does Game of Thrones. The first song is Iconic, one of the dimmer bulbs from Rebel Heart, followed by Bitch I'm Madonna, a great title in search of a decent song. But when the dancers depart, and Madonna struts down the runway to strap on a flying V, the show has lift-off with Burning Up. One of her earliest records, it amounts to a manifesto ("I'll do anything, I'm not the same, I have no shame") and all these years later it still grabs you by the throat. Aged 57, Madonna is still palpably hungry, and her performance has an enduring rawness and truth. Unmediated and undiluted, she's the ringmaster of her own circus, connecting with her hardcore in a totally instinctive way, regardless of the choreography, pyrotechnics and fancy costumes (created by a battery of top fashion designers - but really, who cares?).

Madonna's striking ability to imbue songs that might seem throwaway with significance and depth is illustrated four songs in. On record, Holy Water is a mortifying extended metaphor for her, ahem, vaginal secretions. But on stage, it's a Ken Russell fantasia in which a scene of transgender naughty nuns poledancing (including Madonna climbing some 12 feet into the air to stand on a revolving naked man, one of several moments which involve genuine physical peril) morphs into a genuinely unnerving demonic parody of the Last Supper in which Madonna ends up tied up on the table, legs akimbo. - [The Guardian]

Madonna brought her extravagant "Rebel Heart" tour to NYC Wednesday night (9/16), the first of three arena shows here, and the first of two at Madison Square Garden. With a production this enormous -- everything is a choreographed set piece with dozens of dancers, props, costume changes, etc -- it should be no surprise this is the same setlist as she's done in Montreal and Washington, DC. But this is as much a show as a concert, still filled with hits and a smattering of new songs too. (Maybe tonight's MSG show will offer surprises.) Setlist is below.

Comedian Amy Schumer opened the show, as she will on all the NYC dates, and came out last night swigging a bottle of champagne, and commenting on her being chosen for the gig: "Who better than you to open up for Madonna?" "Uh...Any band?" Schumer would also come back onstage at the end of Madonna's set for "Unapologetic Bitch," where she got spanked by Madge herself. Video of that is below.

Madonna and Schumer do it again at MSG tonight (9/17) and then hit Barclays Center on Saturday (9/19). Tickets are still available. More instagrams from Madonna's first night at MSG, below...

Oh hey @amyschumer who appeared next to me @madonna last night before taking the stage! #amyschumer #madonna

@Madonna having a little fun with @amyschumer on stage at @MadisonSquareGarden! https://goo.gl/17DQq0