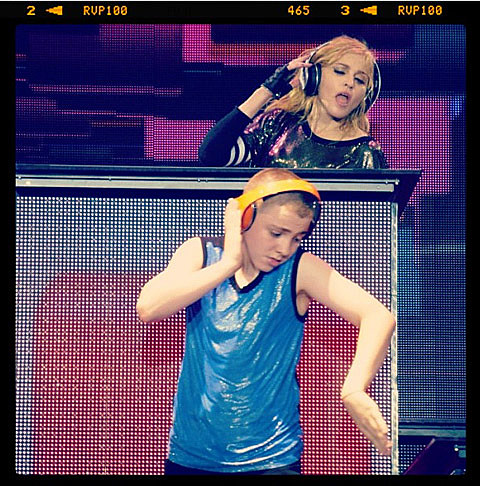 Nobody knows better than Madonna that size matters. So it's no surprise that her new "MDNA" tour gained some extra oomph from Thursday's blown-up stadium version at Yankee Stadium...

...Even the one time Madonna spoke to the audience at length she had a sober "message." She spoke of touring the world and "seeing people being locked up and put in jail for speaking their minds, for being gay, for not practicing the right religion."

It inspired in her a renewed patriotism. She said she "realized how lucky I am to be living in America. We're free."

...Of course, the whole show was hardly a singing-dancing representation of Madonna's angst, philosophy, and leftover anger at ex-husband Guy Ritchie. With pluck, she dolled herself up as the world's oldest drum majorette in "Express Yourself."

...Here, Madonna took a deserved jab at Lady Gaga by blending her '90s hit with one by the younger star that rips it off, "Born This Way." - [NY Daily News]

Madonna played Yankee Stadium last night (9/7) and she's the first woman to ever headline the place. She'll do it again Saturday (9/8), and has a show at Madison Square Garden on November 12 -- both those shows are sold-out. However, Madge has just added another MSG show on November 13 with Martin Solveig opening. Tickets go on sale on Friday, September 14 at 10AM via LiveNation with an Icon Lifetime Legacy Member presale beginning 9/10 at 10 AM, a CitiCard presale on 9/10 at 3 PM, and a Livenation presale on 9/13 at 10 AM. That's a lot of presales!

In between the hits last night, Madonna took time out to show support to both Barack and Michelle Obama and there's video of that below, along with her Yankee Stadium setlist. Meanwhile, the object of Madonna's "Express Yourself" jab (see review above), Lady Gaga, is touring soon too.

Updated Madonna dates, plus Yankee Stadium setlist and video are below.

Setlist: Madonna @ Yankee Stadium 9/6/2012
Prayer
Girl Gone Wild
Revolver
Gang Bang
Papa Don't Preach
Hung Up
I Don't Give A
Best Friend
Heartbeat
Express Yourself
Born This Way
She's Not Me
Give Me All Your Luvin'
Turn Up the Radio
Open Your Heart
Sagara Jo
Masterpiece
Justify My Love
Vogue
Candy Shop
Erotica
Human Nature
Like A Virgin
Nobody Knows Me
I'm Addicted
I'm A Sinner
Like A Prayer
Celebration