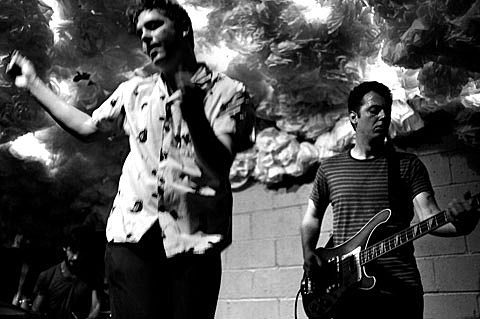 San Francisco's Magic Bullets are back in NYC this week for CMJ, playing four shows: Wednesday (10/20, 8:20 PM) at Bruar Falls for the Quite Scientific/Mon Amie showcase; Friday (12:30 PM) at Public Assembly for the BrooklynVegan day party (more details TBA); Friday (5:15 PM) at Bruar Falls for the KXSC/KVRX day party; and then Saturday (10/23, 5PM) at Knitting Factory for the AAM party.

The band just here in August, you may remember. I said then:

The band's debut album, just out on Mon Amie Records, recalls the early '80s days of Orange Juice, Aztec Camera, Haircut 100 and The Style Council, with a little C-86 in there as well. (That's basically the formula to get me to come see your band. Well, one of them.) In addition to drawing from a bunch of influences dear to me, they write some fantastically catchy songs.

I saw Magic Bullets at Glasslands and they were just great, a lot of fun live. The most onstage dancing by a band I'd seen in some time and that spirit definitely transfered to the crowd. And maybe it was just me but they kind of blew the night's hyped headliner, Tennis, out of the water. Check out the MP3 of "Lying Around" at the top of this post. And go see them this week if you can.

All upcoming Magic Bullets tour dates, plus a couple of videos from their Glasslands performance (via Bleary Eyed Brooklyn) are below.

--
Magic Bullets - On Top of the World